All the talk about the winning side gaining momentum heading into the Rugby World Cup came to nothing when the All Blacks and South Africa fought out a 16-16 draw in their Investec Rugby Championship Test in Wellington on Saturday.

It was a tight contest, typical of those earlier in the legacy between the two nations.

QUICK TAP: ICONIC ALL BLACK JERSEY COLLECTION REVEALED
The sides could claim a half each, the South Africans the first, the All Blacks the second, in which they controlled possession for long periods, and in the last minute of the game in a last throw of the dice it was rising Springboks replacement halfback Herschel Jantjies, who followed up a centring kick by wing Cheslin Kolbe to beat All Blacks replacement Aaron Smith for the ball to secure the try and the draw.

Jantjies, who only made his Test debut a week ago was on the field after Faf du Plessis did not get back in time after an HIA test.

For the All Blacks it was far from a polished performance, resembling the rust-prone effort in Buenos Aires a week ago and also with a concerning shoulder injury suffered by key All Blacks lock Brodie Retallick who left the field in the 60th minute.

South Africa had their own concerns due to rarely looking like scoring tries, other than when wing Kolbe had the ball. They also appeared vulnerable when the All Blacks upped the tempo but their defence held, although they conceded more penalties that they would have wanted, 11 to New Zealand's eight.

So tight was the defence of both sides, there were few chances for players to shine. Barrett always looked dangerous while first five-eighths Richie Mo'unga had a sound game, several times taking the ball to the line and also producing tidy cover play.

Halfback TJ Perenara had a strong game over the ball while in the tight, replacement forwards, hooker Dane Coles and prop Angus Ta'avao made an impact while the longer the game went the more blindside flanker Shannon Frizell was able to get into the game.

South Africa were well led around the field by first five-eighths Handre Pollard, the man whose nerves of steel resulted in the conversion on fulltime to secure the draw. Kolbe was dangerous but not allowed too many chances, although he had the final say.

Up front, South Africa made the most of powerful play from hooker Malcolm Marx, locks Eben Etzebeth, Franco Mostert and substitute RG Snyman.

South Africa dominated the first half but failed to put points pressure on the All Blacks with their only reward two penalty goals to first five-eighths Handre Pollard. It could have been more but like All Blacks fullback Beauden Barrett, he missed one shot at goal. Barrett missed another in the second.

The All Blacks still looked to be finding their feet as their returning players struggled to slip into their full game mode with poor passing, dropped ball and chargedowns, where Mo'unga twice had kicks charged down.

The South African defence compounded the pressure as they forced 13 turnovers to eight of their own on the All Blacks but it was a measure of the home side's intent that in spite of all the possession South Africa enjoyed the All Blacks had made only 48 tackles compared to 42 by the visitors.

Ironically, it was a lost All Blacks lineout throw just out from their own 22m line that produced the first try of the game.

Kolbe, who featured in one dangerous run early in the half, charged through the All Blacks defences until running into a Retallick tackle. But South Africa looked to move the ball again only for No.8 Duane Vermeulen to drop it.

New Zealand won the ball and with advantage, it was moved for second five-eighths Sonny Bill Williams to throw a long pass which found Barrett running inside the sideline at speed. He raced into space and when confronted passed inside where centre Jack Goodhue was on hand and able to run in a 36th minute try which with Barrett's conversion took the All Blacks to a 7-6 lead at halftime.

That gave the All Blacks the achievement of being the first international side to score 16,000 points while no other side has scored more than 14,000 points.

No count back on boundaries in Wellington. It's a draw. Thanks for an epic Test @Springboks.#NZLvRSA #BACKBLACK ???????? pic.twitter.com/iJKkskeELf— All Blacks (@AllBlacks) July 27, 2019 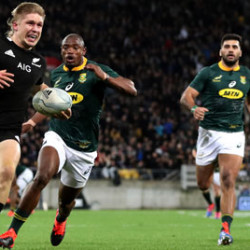