Limiting Argentina's opportunities to unleash their running game would be the goal for the All Blacks in their Investec Rugby Championship Test in Nelson on Saturday.

All Blacks fullback/wing Ben Smith said the sort of play Argentina was capable of when getting opportunities to run the ball had been seen in their win over South Africa in the last round.

QUICK TAP: ALL BLACKS WORRIED ABOUT PUMAS SET PIECE
"I think that flair they have in their game, you saw that against South Africa. I think they are quite instinctive players naturally, so I think that group of players have been together for a few years now and it's starting to show through with the combinations they are getting," he said.

They had good skill sets and a good mixture in the way they played with threats across the board and also in how they wanted to play.

The challenge for the All Blacks, defensively, would be to limit the chances Argentina got and that meant executing with the ball first to not give them the opportunity while being aware of their particular threats.

Smith said Argentina would have had a boost to their confidence the way their attacking game was going and the All Blacks would have to be on their game to defend that.

"Defence is really just an opportunity to try and get the ball back so we'll have to have a really good plan around that," he said.

Hooker Codie Taylor said both the All Blacks and Argentina liked to keep the ball alive and the Pumas didn't like dying with the ball and it was the same for the All Blacks.

"If we get a chance to play and throw it around we sort of enjoy doing that and that's what they've shown in their game as well," he said. "It can be hard to stop, and if you don't, it's dangerous."

Taylor said Argentina were the best team in the championship at holding onto the ball.

"It just shows they're prepared to go long phases to break you down and to keep that ball alive to create opportunities for their backs who are pretty classy players," he said.

Taylor said it was unreal to have prop Angus Ta'avao join the side. He had worked hard in the background for a few years but he was in the right place when another opportunity came up for a front rower.

"It's a great chance for him to come in and learn from the boys, he's got Owey [Owen Franks] and Ofa [Tuungafasi] to learn off so I think when he gets a chance he's going to be awesome," he said.
The fact that older players coming into the side generally had a lot of Super Rugby experience behind them made their stepping up to Test level easier than when much young players joined the side.

He added that every player coped differently with coming into the side and pointed to wing Rieko Ioane debuting at 19 years of age and while he was 'a freak', Taylor said he didn't think he could have handled being the side at 19.

Forwards did tend to develop later in their career while backs were coming through much younger. 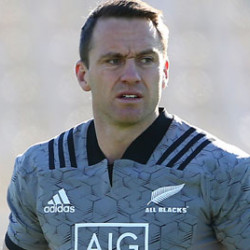