Magpies are ‘The Bay’ after thriller Hawke’s Bay extended its lead in the Championship after a last gasp 29-28 victory over Bay of Plenty at Napier’s McLean Park.

The tense, tight and passionate Battle of the Bays match went to the wire, with the Magpies scoring a 78th minute try, for the bonus point, via replacement prop Joe Apikatoa.

It enabled Gareth Evans’ team to regain the MacRae-Shelford Cup, with Ian MacRae himself on hand to present the silverware, and allowed Hawke’s Bay to call itself ‘The Bay’, in rugby circles at least, for another year.

QUICK TAP: COUNTIES MANUKAU BASK IN SOUTHLAND'S SUN The home side, whose home record since 2016 is curiously poor, started well on Club Socks Day. Wing Jonah Lowe was in the tries again, scoring in spectacular fashion in the corner off yet another offload by his fullback JJ Taulagi. That was after just three minutes.

But then the Magpies got loose, tackling too high and on the back foot in the scrums. Mike Delany ran the cutter with aplomb and kicked his goals for Bay of Plenty.

Steamers halfback Richard Judd scored the first of his two tries with a dart from a scrum, busting through an ineffectual tackle by his opposite Brad Weber. The visitors took a 13-8 advantage to oranges.

But the Magpies hit the second spell with more intent. Prop Ben May threw a long reverse pass which will make the highlight reels but of more import was the fact that Weber made up for his fragile defence with two key strikes within three minutes.

The first came from the unpromising position of a scrum in reverse, but he was slipped a nice ball from his No 6 Marino Mikaele-Tu’u. Weber then started his next try, hoisting a box kick, latched onto by Lowe who then fed his halfback with an inside ball. The try dive was early but it counted.
The Steamers’ errors were racking up, but they were far from out of the contest, Judd showing his pace to score from 40m out and then Delany diving over after a big break by replacement lock Aaron Carroll.

It was 28-22 until Apikatoa’s winning surge.

The two No 9s were outstanding, sharing four tries, but Will Tremain, who picked up one point in the Duane Monkley Medal ladder, offered telling impact off the pine.

The Magpies travel to Waikato for their next match on Thursday, while Bay of Plenty is away to North Harbour next Sunday. 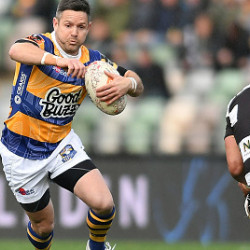