Maori All Blacks Head Coach Colin Cooper has announced the coaching and management team for the Maori All Blacks' 2016 northern tour at the end of this year.

“I’m delighted to have Tana and Carl join us. Their mix of specific coaching skills and insight as former players adds huge value to the work we are doing around this team.

“Tana brings a certain mana to our team – he understands the professional rugby environment well and brings a strong High Performance approach to his work. There’s no doubting the knowledge that Carl brings to the forward pack so it’s great to have him on board as well,” Cooper said.

"The Maori All Blacks is a special team and it's important that we can access great high performance coaching skills."

The Maori All Blacks squad to tour will be named next month. 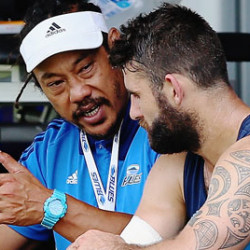