The Maori All Blacks have closed their successful, and unbeaten, tour of the Americas with a fine display of attacking rugby to blank Chile 73-0.

It turned out the victory by the Maori was today’s only joy for New Zealand fans, who saw the Black Ferns and All Blacks both go down, to France and Ireland respectively.

QUICK TAP: READ-IRELAND WAS BETTER TEAM ON DAY
Los Condores were game on the tackle, but overwhelmed under the weight of possession and some nicely-taken tries by the visitors. Their kicker, Santiago Videla, missed both his shots at goal, and they created few other chances.

For the Maori, No 10 Otere Black continued his sharpshooting off the tee, kicking seven from seven before missing his final attempt. Opensider Mitch Karpik had a superb game, scoring three tries and galloping about in the loose. Lock Jackson Hemopo scored a double, and played equally well in both the tight and loose, even showing off a chip kick. Nothing came of that, but it was a stark indication of the Maori All Blacks’ mindset and confidence.

In the backs, wing Shaun Stevenson, fullback Josh Ioane and second five Rob Thompson were prominent, while replacement Sam Nock scored a brace on debut for this team.

The star turn, however, was No 8 Akira Ioane, who again powered through 80 minutes in a towering display. He did not cross the whitewash, but had a hand in no less than seven of the 11 tries using either his pace, strength or ability to offload or pass at exactly the right moment.

Unlike the week beforehand against Brazil, the Maori dominated the scrums, and used that as a launching pad to show some of their moves, skills and support play.

It was off a Hemopo lineout take that Akira Ioane made the bust to set up halfback Bryn Hall for the first of his two tries. Hemopo himself then crossed off a lineout drive set up by Ioane.

Karpik’s first try showed his ability to run the right lines and a nifty right foot step. He ran freely and effectively all day.

Hall’s second was due to a 1-2 with Stevenson, the latter showing great skills with an over the top pass.

Full time here in Santiago with the Maori All Blacks taking a big win over Chile in their last match of 2018. 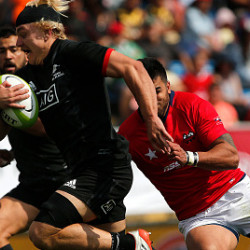