Winning 35-3 the Maori All Blacks had to work harder than the scoreline suggested to claim victory over a game Brazil side in Sao Paulo on Sunday (NZT).

Showing determination and defensive steel unexpected of them, Brazil gave their more experienced Maori opponents no respite in conditions affected by heavy rain.

QUICK TAP: ALL BLACKS CLAIM ONE POINT WIN OVER ENGLAND
It wasn't a night for the sort of free-flowing backplay that might have been expected against a side ranked 26th in the world and the busy home pack revelled in the close-quarter exchanges.

But, ultimately, the ability to take their chances proved the difference as the Maori scored five unanswered tries.

Brazil earned respect for their competitiveness and no moment will shine longer than their 48th minute scrum which saw them push the Maori All Blacks nearly 10m to earn the penalty which allowed New Zealand first five-eighths Joshua Reeves to land the goal to give them their first points.

Props Lucuas Abud and Jedel Vettorato proved a real handful in the scrums and it wasn't until Tyrel Lomax and Chris Eves came on as substitutes that the home pack were contained.

Three minutes into the game the Maori All Blacks used an orthodox lineout drive to secure the first try to lock Isaia Walker-Leawere.

Brazil were feisty, looking to make an impression but earning themselves a warning from referee Federico Anselmi and as a result they lost their hooker Wilton Rebolo for a late tackle 16 minutes into the game but the Maori All Blacks were unable to capitalise in the face of some determined play from the home side.

However, as the rain pelted down, they reverted to more cohesive driving play and in the 27th minute Ash Dixon emerged from a maul to get the ball over the goalline for the second try.

There was a moment of debate 52 minutes into the game when home fullback Daniel Sancery dropped the ball. It was toed ahead by second five-eighths Tei Morgan, was knocked-on by another Brazil player before replacement halfback Bryn Hall toed the ball into the in-goal. In the race for the ball Reeves missed grounding for the 22m while Hall was ruled not to have got downward pressure clearly on the ball.

However, Brazil failed to clear their half and with their heavyweight All Black substitutes into the fray, the intensity of the side lifted and produced a 57th minute lineout drive off the take of lock Pari Pari Parkinson, one of the harder workers in the Maori pack, for Dixon to cross for his second try.


More power play from the pack resulted in continuity from pick and goes that saw Walker-Leawere, Jackson Hemopo and Mitch Karpik each driving ahead before Hemopo scored under the cross bar.

The ability to hold players in tackles to create turnover maul situations was an advantage heading into the final quarter also helped maintain the Maori All Blacks' momentum.

Three minutes from the end a rare demonstration of flowing backplay saw replacements Josh Ioane and Matt Proctor combine to put wing Jonah Lowe over in the corner.

FT | The #MaoriAllBlacks have come away with a hard fought win over a passionate Brazilian side in front of a brilliant crowd in Sau Paolo. #BRAvMAB ???????? pic.twitter.com/fkvM1NNLqC— All Blacks (@AllBlacks) November 10, 2018 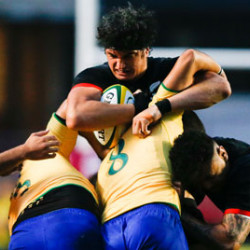