The Maori All Blacks squad has arrived in Fiji ahead of their season opening match against Fiji, in Suva on Saturday.

The squad was greeted with a special welcoming ceremony at Nadi International Airport, to which the Maori  team responded with a waiata (song) and haka.

As the squad heads to Suva today, Coach Clayton McMillan confirmed three new players have joined the Maori  All Blacks squad in Fiji.

Highlanders loose forward Elliot Dixon has withdrawn from the squad and prop Ben May has been ruled out with injury.  Dixon has been replaced by Crusaders loose forward Billy Harmon (Ngai Tahu, Canterbury) while props Haereiti Hetet (Ngati Maniapoto, Waikato) and Pouri Rakete-Stone (Ngapuhi, Hawke’s Bay). 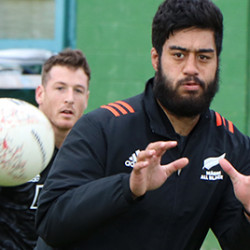