The Maori All Blacks team to face the USA Eagles in Chicago’s The Rugby Weekend triple-header, has been named.

2 Ash Dixon (Captain) Hawke's Bay Ngati Tahinga
3 Ben May Hawke's Bay Ngati Maniapoto / Waikato
4 Isaia Walker-Leawere * Wellington Ngati Porou
5 Pari Pari Parkinson * Tasman Te Whanau a Apanui
6 Reed Prinsep Canterbury Te Rarawa
7 Mitch Karpik * Bay of Plenty Rongomaiwahine / Ngati Kahungunu
8 Akira Ioane Auckland Ngapuhi / Te Whanau a Apanui
9 Brad Weber Hawkes Bay Ngati Porou
10 Otere Black Manawatu Ngai Tuhoe / Te Whanau a Apanui / Ngati Tuwharetoa
11 Regan Ware * Taranaki Ngati Porou
12 Teihorangi Walden Taranaki Ngati Kahungunu / Nga Rauru
13 Rob Thompson Manawatu Ngati Kahungunu / Nga Rauru
14 Jonah Lowe * Hawke's Bay Ngati Pikiao
15 Shaun Stevenson North Harbour Ngapuhi
16 Robbie Abel * Auckland Ngati Wai, Waikato-Tainui, Ngati Hine
17 Ross Wright Northland Ngati Whatua / Ngati Porou
18 Marcel Renata Auckland Ngati Whanaunga / Ngai Takoto
19 Hoani Matenga * Bay of Plenty Rangitane / Te Whanau a Apanui
20 Billy Harmon * Canterbury Ngai Tahu
21 Jonathan Ruru Auckland Ngati Kahungunu / Rongomaiwahine
22 Josh Ioane * Otago Te Rarawa
23 Matty Lansdown * Waikato Te Atiawa
Ash Dixon has been named as captain of the Maori All Blacks alongside 10 debutants for their match against USA in Chicago on Saturday.
Head Coach Clayton McMillan has a true mix of experience and fresh faces in the 23, with the locking combination of Isaia Walker-Leawere and Pari Pari Parkinson, wingers Jonah Lowe and Regan Ware and loose forward Mitch Karpik all earning run on debuts.
“Izzy (Walker-Leawere) and Pari Pari (Parkinson) come off the back of some great Mitre 10 Cup campaigns.  They’re extremely big rigs, 270 odd kilos between then; a lot of raw meat, real power, and if they put that to good use I’m sure the team will benefit from it” he said.
Experience comes in the form of established midfielders Teihorangi Walden and Rob Thompson and formidable front row of Dixon, Chris Eves and Ben May.  Robbie Abel, Hoani Matenga, Billy Harmon, Josh Ioane and Matty Lansdown are all in line for debut from the bench.
McMillan said the team has been enjoying their preparation in Chicago but there were challenges.
“Chicago has been great to us.  It’s a fantastic city and the weather has been kind to us.  The boys who joined us over the weekend, have got into the books and got up to speed quickly and are good to go.
“Some of the guys are a little bit banged up - 100 minutes of rugby in the Mitre 10 Cup Final has taken its toll but we’re managing the boys’ loads pretty closely as we don’t want to overcook them.  They are smart, professional players, and they know how to prepare for this game,” he said.
“A lot of those guys on the bench will bring energy and there’s also a little bit of strategy because there was a good percentage of them played in the (Mitre 10 Cup) Final last week, and we want to respect the fact that they are a little bit banged up, but they will bring good energy.”

?? The Maori All Blacks have landed in Chicago and what better way to see the famous city than a few team challenges around the streets! ?????? pic.twitter.com/NiROkke9sH— All Blacks (@AllBlacks) October 31, 2018

The squad includes Sam Nock and Isaac Salmon who were added to the squad last week, and sevens sensation Regan Ware, has been named to start on the wing, after he was called into the squad as an injury replacement.
“Regan’s opportunity comes unfortunately through an injury to Caleb Makene who was injured in the Final. Regan trained with us at our camp in Tauranga and made a really good impression and fortunately, the All Blacks Sevens accommodated our request to have him released.  He was another player who really showed his ability during Mitre 10 Cup with Taranaki.”
McMillan said he was expecting their USA opposition to be physically demanding.
“They’ll be what we expect from a lot of American athletes, big, strong, a direct style of rugby, a lot of mauling … a very physical encounter.  We’re prepared to match fire with fire but want to be smart and use a bit of width as well.  We need to respect the fact that the Eagles have some power up front.  They have tall timber and we need to ensure we get our share of quality ball to give our backs the opportunity to play and to have a mindset of spreading the ball and doing justice to the Maori jersey and playing a brand of rugby that is synonymous with Maori rugby – and that is about showing a lot of flair and confidence, in a free spirited nature.
“This weekend will be a fantastic occasion, a triple header, and it’s been great to be at the same hotel as the Black Ferns. It will be good to watch them play, and Ireland v Italy – there are a lot of Irish supporters in town – so yes, it will be a massive occasion,” McMillan said.
Maori All Blacks Match Schedule (Kick off times are local)
v USA
Soldier Field, Chicago, USA
Saturday 3 November
Kickoff: 6pm
(Sunday 4 November 12pm NZT)
v Brazil
Estadio Do Morumbi, Sao Paulo, Brazil
Saturday 10 November
Kickoff: 8pm
(Sunday 11 November 11am NZT)
v Chile
Estadio San Carlos De Apoquindo, Las Condes, Chile
Saturday 17 November
Kickoff: 4pm
(Sunday 11 November 9am NZT)

ICYMI | This Saturday's #AllBlacks v Japan Test match will be available to live stream in selected countries, FOR FREE! Click below to see if you can watch in your country. ???????? 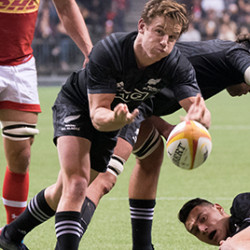