Match fitness a concern for Springboks

Captain and flanker Siya Kolisi, prop Tendai Mtawarira, locks Eben Etzebeth and Lood de Jager and loose forwards Pieter-Steph du Toit and Warren Whiteley are all out of the game at the moment but Erasmus believes only de Jager and Whiteley could miss the start of the Championship against the Wallabies at Ellis Park on July 20.

QUICK TAP: SUPER RUGBY PLAYOFF RACE GETS CLEARER
South Africa then play the All Blacks in Wellington on July 27 before travelling to Argentina for a Test on August 10 and a friendly World Cup warm-up game, also against Argentina a week later.

That reduces the time for injured players to get up to full match fitness.

"Warren will definitely be out for the start of the Rugby Championship," Erasmus said.

"I think if you go and look at some of the other countries, there are guys who are already out and are serious contenders for the World Cup as well.

"In terms of injuries, a guy like Siya Kolisi is going to be out now, but he is going to be fit for the first Test match [of the Rugby Championship]. But game time will be a problem," he said.

However, Erasmus was happy with how the Springbok players had been managed during Super Rugby.

Even the decision by the Bulls to return first five-eighths Handre Pollard to New Zealand for the key game against the Highlanders was supported.

"If, for example, he didn't play, and the Bulls didn't draw the match…And he didn't play in the last match [against the Lions], he wouldn't have played for six weeks going into the Rugby Championship," he said.

"At the beginning of the season, we addressed this with the franchises, and we agreed on average minutes that we would like every single player to be on.

?? When Dad takes you to the office...we bet you are not going to see a more adorable video today.

"They are really close to the targets, so I want to thank them [franchises] for that," he said.

Erasmus was speaking during a press conference which announced a new contracting model for South African players.

The emphasis shifts from South Africa Rugby to provincial unions contracting players and player budgets will be capped.

South Africa Rugby's chief executive Jurie Roux said the existing model was not working and rugby's economy couldn't continue to support a large fully professionalised workforce. At the same time the strategy to retain top players had become too narrowly focused. As part of that a 'commitment' clause will be included in contracts whereby young players will be rewarded for longer-term commitments to South Africa.

Categories for payment will be: professional, semi-professional and development players while Super Rugby squads will be capped at not more than 45 players.

Erasmus said the new approach was to create a system to identify, manage and reward the best players to the benefit of both the Springboks and franchises.

"South Africa Rugby will identify and help nurture young talent from the schoolboy ranks and contribute to their remuneration through the unions. This way we will have upwards of 60 players of national interest involved in Springbok planning in an integrated play with their contracting union.

"It broadens the Springbok pool and will work to encourage our players to remain in South Africa. It also gives the national coaches the opportunity to work with the franchise coaches on honing the players' skills on an on-going basis," he said.

Tonga is coming to Hamilton for a day-time Test this September and to celebrate we have picked the all-time All Blacks XV of Tongan descent! 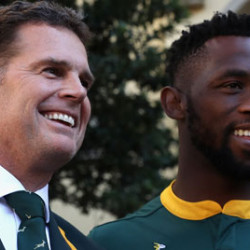