Damian McKenzie ensured the Chiefs a 28-10 win over the Brumbies in an individual display which lifted the game out of the ordinary at Hamilton's FMG Stadium on Saturday.

The Chiefs fullback scored 18 points courtesy of a try, two conversions and three penalty goals and flitted among the tall timber on the field like a humming bird in a kauri forest to lift himself to 120 points for the season.

The win was crucial for the Chiefs to keep their hopes alive of less travel for their quarter final game but it was not the dress rehearsal they may have wanted. However, it did ensure that Australian sides failed to claim a win against New Zealand teams in 25 games this season

The Brumbies may have taken some small confidence from the game as they rested many of their top players for their quarter final next week. They didn't look like scoring more than the one try they managed but they did manage to get under the Chiefs' skin and disrupt their usual flow.

However, it had to be acknowledged that the Chiefs also didn't have their No.1 side on the field.

McKenzie had no sooner opened the scoring with a penalty goal than the Brumbies tried to move the ball only to concede a penalty at the breakdown. From the lineout, where the ball was thrown short to the front with a quick clearance from halfback Tawera Kerr-Barlow to first five-eighths Aaron Cruden, second five-eighths Charlie Ngatai was able to take the tackle.

From the ruck, Kerr-Barlow threw a weighted, slower, pass for blindside wing Solomon Alaimalo to run onto. He broke the line and headed out to link with McKenzie. The fullback at speed broke back and then out again to out-speed the defence for a stunning 19th minute try.

However, the Brumbies, who had set the early pace had some reward when, from a lineout take quickly released, centre Nigel Ah Wong scored in orthodox fashion when taking an outside gap in the 25th minute.

A spectacular 38th minute Chiefs try was ruled out when a forward pass by wing James Lowe early in the move was detected after the try was awarded 70m later to Lowe, who had supported some clever inter-passing between McKenzie and Alex Nankiville.

Former Waikato player, Brumbies first five-eighths Wharenui Hawera landed a penalty goal after the half-time hooter to get his side to 10-13 down at the break.

Afterwards, soon after the restart, the Brumbies were penalised for taking out McKenzie in the air. McKenzie took a quick tap and was impinged by Brumbies halfback Tomas Cubelli, who was sin-binned for cynical play, which was immediately used by the Chiefs as they took ball to the line and when it was moved back they had players to burn as Alaimalo crossed out wide.

Frustrated at not being able to gain the sort of continuity in their play through the middle stages of the second half, the Chiefs finally broke the shackles after strong play by flanker Mitch Karpik, replacement tight forwards Atu Moli and James Tucker. They set up ball in the 70th minute and moved fit or McKenzie to find No.8 Michael Leitch who went over in the corner for McKenzie to land the conversion. 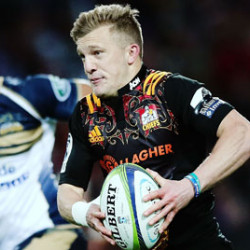