Mike Cron to leave All Blacks after RWC2019 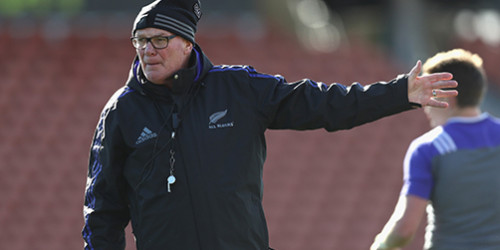 One of world rugby's most innovative and respected coaches, All Blacks Forwards Coach Mike Cron, has announced that this year will be his last with the national side.
Known to all in rugby circles as "Crono", 64-year-old Cron has been involved with the All Blacks since 2004 and involved in multiple campaigns during that time, including the victorious back to back Rugby World Cups of 2011 and 2015 and successful Bledisloe Cup, Investec Rugby Championship and Grand Slam campaigns.
QUICK TAP: BLACK FERNS SUPER SERIES GUIDE
"I've been incredibly lucky and had a wonderful career coaching at international level and I'm really looking forward to this last year with the team," Cron said.
"It will be my fifth Rugby World Cup this year (four with the All Blacks and one with Wales) so is the right time to step down from the international game."
Cron said after coaching for 37 years, he wouldn't be quitting for good, but would now focus on mentoring younger coaches and up and coming players.
"That's my other passion. As well as coaching younger players and helping them hopefully reach their potential, I'm also keen to help out the young coaches of the future, so looking forward to doing that."
New Zealand Rugby CEO Steve Tew has led the tributes to Cron.
"Crono is a national treasure and thousands of players, from school, club, provincial, Super Rugby, the Black Ferns and of course the All Blacks, have been coached and mentored by one of the best rugby coaches in the world.
"He has a real desire to mentor young players and coaches and really cares about their development, so we're delighted he will continue to contribute to the future of the game in New Zealand."

?? Exactly 32 years ago today, the All Blacks lifted the inaugural @RugbyWorldCup title at Eden Park. Listen to victorious flanker Alan Whetton as he recalls the key moments of that magical day in 1987. ??????#BackBlack pic.twitter.com/o4vnI667Oq— All Blacks (@AllBlacks) June 19, 2019

All Blacks Head Coach Steve Hansen said: "Sometimes in life you're lucky to come across a real influencer in your career. For me, Mike Cron is one of those people.
"He's one of those guys I've leaned on from day one of my coaching career. Initially, that was around scrummaging, with Canterbury and the Crusaders, and then with Wales. Then I suggested to (former All Blacks Head Coach) Graham Henry that we bring him into the All Blacks.
"His ability to teach anyone - younger, older, male or female - is world renowned and the greatest gift that Crono has is his ability to always keep learning and to keep giving. I've seen him coach club, provincial, Super and international rugby, plus even a stint overseas, all in the one year.
"As 'Tewy' said, he is a national treasure. He and his family must be immensely proud of everything he has achieved throughout his career, not only with the All Blacks, but with all the teams and individuals he has coached. It's great that New Zealand Rugby hasn't lost him completely.

"On behalf of the All Blacks family, we'd like to thank him for his many years of service. I'd also like to congratulate him and April on making their decision and wish them all the very best for the future."
Mike Cron, All Blacks Assistant Coach - Forwards
Mike Cron first began working fulltime with the All Blacks in 2004 and after many years as the All Blacks Scrum Coach, moved into a wider role as the Forwards Coach in 2012. Mike has been coaching since 1982 and is recognised as one of the most innovative and respected coaches in the world. He has been a long-time New Zealand Rugby resource coach working with New Zealand's other national teams, Super Rugby sides, provincial and academy teams, and numerous amateur club and schoolboy teams. He has also coached all around the world and was scrum coach for Wales at the 2003 Rugby World Cup, working alongside Head Coach Steve Hansen. Earlier in his playing days, the former police officer represented Canterbury at prop and captained the New Zealand Colts and Combined Services teams before starting his coaching career with the St Andrews College First XV. He was made a member of the New Zealand Order of Merit (MNZM) in 2015.

Next time it will happen under the sun in September when the @AllBlacks face Tonga in Hamilton! Are you ready? 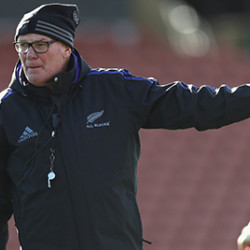 View all
All Blacks Sevens and Black Ferns Sevens teams named for Cape Town
The All Blacks Sevens and Black Ferns Sevens teams for the Cape Town leg of the World Rugby Sevens Series have been named.
Ruahei Demant and Black Ferns shine at the ASB Rugby Awards
Black Ferns co-captain and World Cup winner, Ruahei Demant has collected three major prizes at the 2022 ASB Rugby Awards, including the supreme Kelvin R. Tremain Memorial Player of the Year.
2022 in review with Kirstie Stanway and Joe Wheeler
ASB Rugby Awards show hosts Kirstie Stanway and Joe Wheeler look back on the year that was 2022.
New Zealand Under 18 Sevens teams named for World School Sevens
New Zealand Rugby announced today the selection of the New Zealand Under 18 Boys and Girls Sevens teams alongside the New Zealand Māori Under 18 Ngā Whatukura (Boys) and Ngā Māreikura (Girls) teams competing at the 2022 World School Sevens in Auckland from 17 to 18 December.
New Zealand teams out to defend their crowns in Cape Town
The All Blacks Sevens and Black Ferns Sevens will be defending their South African HSBC World Series titles in Cape Town at the weekend.
Tito joins Blues coaching ranks
Former Māori All Black and Hurricanes locking stalwart Paul Tito will be part of the Blues coaching ranks for the 2023 Super Rugby season, replacing Ben Afeaki, who has joined New York in the United States major league rugby competition.
Six great rookie seasons in Super Rugby
With an exciting batch of 21 rookies named across New Zealand’s five DHL Super Rugby Pacific squads in 2023, we look back at five great rookie seasons of the past.
History of the Tom French Memorial Cup
The Tom French Memorial Cup has been awarded annually since 1949 to the outstanding Māori player of the year.
Gatland to return as Wales coach
Warren Gatland has been granted an early release from his Chiefs contract to return to Wales as head coach in place of Wayne Pivac, who stood down after a review on Monday.
Kurt Baker signs off a decorated sevens career in Dubai
All Blacks Sevens rugby legend Kurt Baker has announced his retirement from international rugby sevens, following the All Blacks Sevens 2022 World Series tournament in Dubai.
Podium finishes for New Zealand teams in Dubai
New Zealand's Sevens sides may not have managed gold medals from the HSBC Dubai World Sevens, but they were on the podium, the Black Ferns for silver and the All Blacks Sevens for bronze.
Super Rugby Pacific locked in until 2030
Super Rugby Pacific’s future has been locked in until 2030 with New Zealand Rugby (NZR) and Rugby Australia (RA) announcing details of a new joint-venture agreement in Sydney today.
Black Ferns celebrations continue with nationwide tour
Weeks on from their historic Rugby World Cup victory in Auckland, fans across the country will have the opportunity to meet their heroes and celebrate #LikeABlackFern.
Highlanders icons return to the club
Highlanders' icons All Black Ben Smith and his co-captain in the side's 2015 Super Rugby champion win, No8 Nasi Manu, are returning to the club in management roles.
All Blacks Sevens and Black Ferns Sevens named for Dubai
The All Blacks Sevens and Black Ferns Sevens teams for the Dubai Sevens have been named.

Players to watch in Sky Super Rugby Aupiki
Sky Super Rugby Aupiki is set to explode with 105 players contracted by New Zealand Rugby (NZR) to represent the Blues, Chiefs Manawa, Hurricanes Poua, and Matatū in 2023.
World Rugby looking at innovations to ‘reimagine’ rugby
World rugby officials have taken the first steps towards 'reimagining' rugby.
All Blacks Sevens and Black Ferns Sevens set to return to Dubai
The sevens series will be in full swing in just a matter of days, with both the All Blacks Sevens and Black Ferns Sevens teams in action in Dubai.
Nominees announced for 2022 ASB Rugby Awards
New Zealand Rugby’s (NZR) top performers of 2022 will be recognised at the ASB Rugby Awards, with nominees announced today.
Hannah Porter appointed in newly formed role of Head of Women's High Performance
Fresh from overseeing the Black Ferns successful Rugby World Cup 2021 campaign, Hannah Porter will take the newly confirmed role of Head of Women’s High Performance at New Zealand Rugby.