History has repeated itself in New Plymouth with Waikato ending a third-straight Taranaki Ranfurly Shield reign with a pulsating 19-33 win at Yarrow Stadium.

After having the ‘log o’ wood’ snatched from their hands by Waikato during their last two tenures in 1996 and 2012, there would have been some extra nerves floating around Yarrow Stadium when the Mooloos rolled into town for their 2018 challenge.

QUICK TAP: WELLINGTON ROCK NORTH HARBOUR IN THE CAPITAL
Although Waikato came in as underdogs in this crossover clash, there’s no such thing in a Ranfurly Shield challenge as the men from Hamilton showed in a breathless first half.

It took just 90 seconds for Waikato to get on the board when skipper Dwayne Sweeney set the tone with a powerful finish inside the ’22.

Taranaki answered back not long after when the Waikato defence paid too much attention to Seta Tamanivalu and left a gaping hole for sevens speedster Regan Ware to score.

But that was to be it for Taranaki in the first half as Waikato took complete control. Just like they had done in beating the highly-fancied Wellington Lions 43-31 on Wednesday night, the Mooloos out-muscled Taranaki upfront and stretched them out wide to pile on the points.

Waikato’s pack were relentless as they threw their bodies into the breakdown and punched plenty of holes in the Taranaki line through their hard one-off running.

In the space of 15 minutes, locking partners Adam Burn and James Tucker and hooker Samisoni Taukei’aho had crossed the line to extend Waikato out to a 26-7 lead.

But the Mooloos weren’t done there. With their confidence brimming, and first five-eighth Fletcher Smith controlling the ship expertly, Waikato laid a hammer blow when 18-year-old midfielder Quinn Tupaea dotted down following some frantic ball movement.

Trailing 7-33 at halftime, Taranaki needed something special to get back into the match and got it through powerful centre Seta Tamanivalu.

In the 43rd minute, Tamanivalu made a big bust in the midfield and pulled off a miracle offload to put Manasa Mataele over out wide. After creating Mataele’s try, Tamanivalu had one himself just five minutes later when he sliced through the Taranaki defence had too much power and pace on his way to the line.

With Waikato’s lead slashed to 19-33 and 50 minutes left on the clock, Taranaki had all the momentum.

On Wednesday night, Waikato gave up three tries against Wellington in the final ten minutes, but there was to be no repeat in a Ranfurly Shield challenge.

Taranaki had plenty of possession and showed great endeavour in the final quarter, but the Waikato defence held firm to hold on for the 19-33 victory.

The win lifts Waikato to second on the Championship ladder and marks three years to the day since they last lifted the Shield against Hawke’s Bay who they will face in their first defence on Thursday. 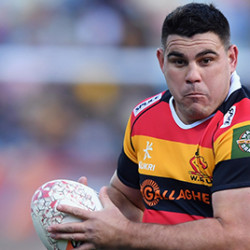