Knowing they stand to equal a 15-year-old record of 26 unbeaten Investec Super Rugby home games, the Crusaders are also looking for a boost against the Sharks in Christchurch on Friday before heading offshore next week.

There had not been any talk earlier in the week about the statistical milestone. Rather they had been aware of All Blacks captain Kieran Read making his 150th appearance for the side and having All Blacks lock Sam Whitelock extend his contract with the side.

QUICK TAP: BLUES EYE STRONG RUN TO SEASONS' ENDCoach Scott Robertson said having Sam Whitelock sign to stay in New Zealand and the agreement he had reached to have a sabbatical in Japan had been 'pretty special' for New Zealand rugby. His experience would be an asset for the Crusaders when he returned given the vacuum Kieran Read's departure would create.

There was more flexibility in contract negotations as witnessed in his agreement and Robertson said Whitelock deserved it given what he had done for the game and the way he had performed.

"That's what you need with big pinnacle events, and continuity and cohesion, so he could easily have gone so the New Zealand Rugby Union should be commended for the work they've done," he said.

PUTT PUTT RUCKUS | How do our #SuperRugby players go when trading the rugby ball for a golf ball? ??#RaiseTheStakes pic.twitter.com/xd4PxaXTaM— Super Rugby (@SuperRugbyNZ) May 1, 2019

The Crusaders had put thought into a future without Whitelock given the amount of time he had been involved with the side but Whitelock had put a lot of thought into his future and he found the contract offered suited him.

As part of the captaincy development process Jack Goodhue had been named vice-captain and would be playing at second five-eighths for the Sharks game.

Robertson said with incumbent Ryan Crotty having his All Blacks rest week, and also heading overseas at the end of the year, it was a great opportunity to play Goodhue in that position while also pairing him with the in-form Braydon Ennor at centre.

"He [Ennor] was a schoolboy star at 13 [centre] and he's going pretty well that at Super [Rugby]," he said.

"Great centres can also play well at 12 [second five-eighths] and he [Goodhue] can chuck on the wing so it gives him great flexibility as well and with Mitch Hunt playing at 10 [first five-eighths] as well it bolsters up that midfield," he said.

Robertson was impressed with the way the Sharks played to beat the Waratahs at the weekend and they showed how physical they could be when they had the ball and hold the ball, they can finish. They've got some great finishers and they've got a good continuity game.

"The Sharks have been impressive. They've probably been inconsistent through the season but when they're on, they're on, so we're preparing for that," he said. 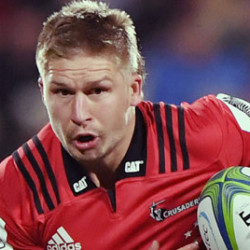