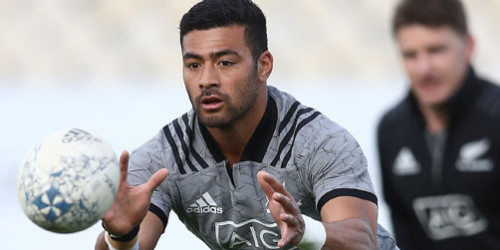 Preparing players for the onus of playing first five-eighths has become something of an art form in All Blacks selection in recent times and Richie Mo'unga will become the latest variation on a theme in Saturday's Investec Rugby Championship Test against Argentina in Nelson.

He'll be following in the footsteps of players who were nurtured under Dan Carter like Aaron Cruden, Stephen Donald, Tom Taylor, Colin Slade and Beauden Barrett, while under Barrett have been players such as Lima Sopoaga and Damian McKenzie.

QUICK TAP: ALL BLACKS v ARGENTINA TEST MATCH PREVIEW
Mo'unga said his choice to start on Saturday was an exciting time and it had been a long dream of his to put the black jersey on and the next best thing was starting a Test match.

"I guess the challenge is living up to the expectation and doing my job for the team," he said.

Preparing for that role would involve having full trust in why he had been chosen and for his abilities. It wouldn't involve doing anything different but he was mindful that he would be looking to provide plenty of 'voice' for halfback TJ Perenara who is also starting.

He said he had no inkling he would get a start this week until the team was read out.

"It's a massive surprise for me. It's always something I've wanted to do and you've just got to wait your time and trust that the management have their timings right and what they're doing is for my interests," he said.

His taste of what can be expected in the atmosphere in the middle came when employed as water boy in the first two Bledisloe Cup Tests in Sydney and Auckland.

It was a job that was harder than it looked with all the voices on the team communication channels and not knowing which voice to listen to.

"But it was an awesome experience to be out there physically, and to hear the chat that was going around and to feel the momentum of the games swing and feel like you're out there playing the game as well. It's the closest thing you can get to playing," he said.

?? "It's been a dream of mine to put the black jersey on"

Richie Mo'unga will start his first #AllBlacks test in the ?? jersey tomorrow night in Nelson. Check out how Mo'unga is preparing himself for his first test start ?? ???? ????#NZLvARG pic.twitter.com/P165LBmZIN— All Blacks (@AllBlacks) September 6, 2018

Dealing with problems needed to be quicker than in Super Rugby. He had also been working with second five-eighths Ngani Laumape to ensure their communication was on par.

And for good measure he had been rooming with fellow five-eighths Beauden Barrett and picking his brain as much as he could.

Perenara said he enjoyed having to get a feel for the game from the starting role as opposed to coming off the bench.

He will also set the scene for Te Toiroa Tahuriorangi to make his Test debut, a player he was well familiar with from their time spent together with the Hurricanes last year.

Perenara said Tahuriorangi, who transferred to the Chiefs this year, was a good trainer, a good player while his passion for rugby was second to none, and on top of that they were rooming together for the week.

"It's a big moment for him and I remember the first moment I was named in the team as well and it's a pretty special time and I'm just trying to be a sort of calming voice for him and letting him trust himself when he gets out on the field.

"The idea is for him to forget all the training and to just go out there and trust himself and back his instincts. He's a good enough footy player to read what's in front of him and execute what he needs to do," he said.