New Zealand must settle for third in Vegas Third position will have to suffice for the All Blacks Sevens in Las Vegas, but they stay in touch with series leaders USA and remain on track for Olympics qualification.

In a stirring Cup semifinal, host USA edged New Zealand 24-19, mainly thanks to a hat-trick by speedster Carlin Isles. It gave USA a fifth straight Cup final appearance but it looked like New Zealand would trump them in the early exchanges, racing to a 12-0 thanks to a Sione Molia try from a clever switch from the opening kickoff just 20 seconds in. Some sweet long passing sent Kurt Baker but that merely sparked the hosts into life.

Joe Ravouvou then made a trysaving tackle but was soon afterwards shown yellow. The USA spurned an easy penalty shot at goal, which looked to have been the wrong call until Isles darted round the side of an unguarded ruck for his third and the victory. USA coach Mike Friday was jubilant at the final whistle, along with the vocal Vegas crowd.

New Zealand coach Clark Laidlaw rang the changes for his starting line-up in the bronze final, and his charges responded with a gritty comeback to head Argentina 26-19.

An early Ravouvou try was countered by three unanswered tries to German Schulz, with a brace, and Rodrigo Etchart.

But New Zealand rallied in fine style, reeling off three tries in as many minutes. Mikkelson set up the first, to Tone Ng Shiu, who showed a big fend. Then Molia recorded a brace, the first from a loose Argentina tap-down from a kickoff and then the second going straight up the middle of the ruck. He scored seven tries in the tournament, continuing his sterling form.

FT | The #AllBlacks7s finish their Las Vegas campaign with a 26 - 19 win over Argentina to claim the Bronze medal#USA7s pic.twitter.com/qRVV3rjo6O— All Blacks Sevens (@AllBlacks7s) March 4, 2019

The Cup final saw USA clean out Samoa – Sir Gordon Tietjens’ men were in their first Cup final – by 27-0 in fine style for its first Cup silverware of the season, successfully defending its Las Vegas title from 2018. The upshot is that USA leads the series on 98 points, five clear of New Zealand in second on 93.

The sixth leg of the World Series takes place this weekend in Vancouver. 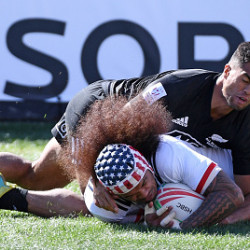