The New Zealand Schools' team has completed their 2018 campaign with three wins from three, finishing with a 24-12 win over Australia Schools’ in Brisbane on Saturday.

In wet conditions at Ballymore Stadium New Zealand Schools opened the scoring with a try to prop Saula Mau, Rivez Reihana converted for a 7-0 half time advantage.

??? Codie Taylor showing a bit of toe to set up Aaron Smith, was this your #AllBlacks play of the week? Vote and you're in the draw to win a signed All Blacks jersey. 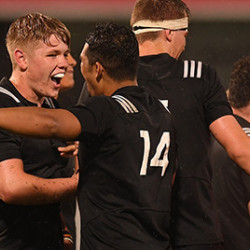