The New Zealand Under 20s have made it two from two at the World Rugby Under 20 Championships with a 42-10 win over Wales in a highly physical encounter in Béziers, France.

After comfortably dispatching Japan 67-0 in the opening round, the Craig Philpott-coached side picked up where they left up by scoring a scintillating try to centre Billy Proctor in just the third minute. Wing Bailyn Sullivan sparked the try by hitting the line at pace and palming off a couple of Welsh defenders before feeding to Proctor for the spoils.

QUICK TAP: PICK YOUR ALL BLACKS STARTING XV
It was an ominous sign for Wales, but it was New Zealand who found themselves on the backfoot when fullback Vilimoni Koroi was yellow carded shortly after. Wales took advantage of Koroi’s ten minute absence by crossing for a converted try and landing a penalty to take a 7-10 lead after 15 minutes.

Koroi didn’t take long to make up for his yellow-card by helping to create tries to Bailyn Sullivan and captain Tom Christie to give New Zealand a 25-10 lead at halftime.

The physicality seemed to increase in the second half as the Welsh pack battled hard in all the tight areas. New Zealand had to work hard for their points in the second half with prop Tevita Mafileo scoring from a charge down and halfback Xavier Roe catching Wales napping with a quick tap close to the line to complete the 42-10 victory.

The win sets up a showdown with Australia for a spot in the semifinals. Australia took out Japan 54-19 to take their tournament tally to 6 points while New Zealand sits on a maximum of 10 points after two games.

Captain Tom Christie said: “What a game of rugby. We knew we were in for a battle and I think it took me about two minutes to start bleeding. So it just shows the physicality that Wales brought and they hung in there for 80 minutes.”

Tune into TVNZ Duke to watch New Zealand take on Australia on Friday 8 June at 7am. 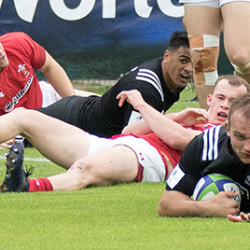