Fresh from victory at the Oceania Rugby U20 Championship, Head Coach Craig Philpott has named the squad that will travel to France to defend the World Rugby Championship later this month.

Philpott said he and his assistant coaches were presented with a tough job in selecting the squad of 28.
“We have been impressed with the quality of players that have been with us throughout our camps and at the Oceania Championships which meant it wasn’t easy to narrow this group down.”
Captain Tom Christie and Blues winger Caleb Clarke return from the champion 2017 team, while at the other end of the scale there are eight players that will be eligible for selection again next year.
Experience also comes in the form of 12 players who have played at Mitre 10 Cup level and 27 of the 28 players having been involved in an Oceania Championship campaign.
“We found that a key factor to our success in 2017 was continuity so it was important to see the bulk of this squad be involved in the Oceania campaign.”
Philpott said there are strengths right across the squad.
“Laghlan McWhannell was the standout lock at Oceania and he is complimented by the two-metre duo of Will Tucker and John Akau’ola Laula. Our captain, Tom Christie, leads an exciting loose forward trio that have been absolutely tireless in their efforts on the field.
“Vilimoni Koroi adds a point of difference in the back three alongside the genuine size and speed in the likes of Caleb Clarke and Leicester Faingaanuku, we are looking forward to seeing what they can create on the field.”
New Zealand is set to face Japan, Wales and Australia in a tough pool play assignment.
“Our focus will be very much on nailing our processes game by game and expecting the unexpected.
“Against Fiji at Oceania, we had to play 60 minutes with 14 men and that was a good test of our systems and mindset. World Rugby has indicated that high tackles and foul play will not be tolerated so we need to be prepared if that happens again.
Under 20 Highlights
• Two returning players from 2017 (Tom Christie and Caleb Clarke)
• Eight players are eligible again in 2019 (Rob Cobb, Kaliopasi Uluilakepa, Devan Flanders, Kaleb Trask, Billy Proctor, Caleb Clarke, Leicester Faingaanuku and Scott Gregory)
• 12 players have already played Mitre 10 Cup
• 12 of 14 Provincial Unions represented
• Only Xavier Numia (returning from injury) didn’t play at Oceania (Caleb Clarke played at the 2017 tournament
• The World Rugby Under 20 Championship has run since 2008, with New Zealand winning six of the 10 titles
• New Zealand Players have won the Junior Player of the Year on three occasions, Luke Braid in 2008, Aaron Cruden in 2009 and Julian Savea in 2010
New Zealand Under 20 management
Head Coach - Craig Philpott
Assistant Coaches - Willie Rickards, David Hill
Scrum Coach - Dave Hewett
Manager - Martyn Vercoe
Doctor  - James Bishop
Physiotherapist - Karl Houltham
S&C Coach - Scott Pinfold
Performance Analyst - Doug Neilson
New Zealand Under 20 schedule (matches will be broadcast live on TVNZ Duke)
New Zealand v Japan
Thursday 31 May
7am (NZT)
New Zealand v Wales
Monday 4 June
2.30am (NZT)
New Zealand v Australia
Friday 8 June
7am (NZT) 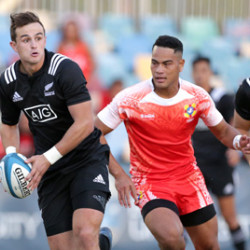