Next test looms for Blues Not having secured a win over the Chiefs in recent Investec Super Rugby history would provide plenty of incentive for the Blues when heading to Hamilton on Saturday.

Coach Leon MacDonald said they were expecting a typically tough battle up front from a Chiefs team now playing with confidence.

MacDonald said the decision to start with All Blacks props Ofa Tuungafasi and Karl Tu'inukuafe, instead of bringing them off the bench as had been the case recently, was because they felt the opposition was right to employ that choice.

"Both sets [of props], if you want to call them that, are delivering and I've mentioned before whatever way we cut that up will depend on what we are wanting from our team in that game," he said.

MacDonald was in no doubt of the threat the Chiefs represent. That was clear from watching the footage.

"They've had two impressive wins and they could easily have beaten the Hurricanes so they're playing good rugby, they're quite confident again, their key players are standing up and playing good rugby. Damian McKenzie and Co. are playing with a lot of freedom and obviously we're travelling away to the Waikato so it is going to be a massive game for us," he said.

"They're definitely a dangerous side, you only have to ask the Bulls who got 40 points put on them about how dangerous they can be and that was over in South Africa. Their results on the road were really impressive against tough opposition and a hectic travel schedule so there's no doubt about the quality of this team," he said.

While the Blues have had issues against New Zealand sides in the derbies in recent years, MacDonald said they wanted to be able to compete well with the other sides and to be able to do that on the road would be massive for them.

"There's not a lot between the New Zealand teams and we just have to be ruthless in all areas and be prepared to defend against some brilliant attack at times," he said.

Flanker Blake Gibson, who left the field with a lacerated knee last week, had a lot of stitches in the wound and he would be given a chance for that to recover properly to prevent infection occurring and he was hopeful he would return in a couple of weeks.

Matt Duffie was named on the bench for the side and set for his first appearance for the season. He had sustained a very bad injury when tearing the hamstring off the bone and team management were determined that he take the full amount of time in recovery. He had done that and was now rearing to go and was at full fitness.

He added to the experience in the side and was able to cover fullback as well while his strength in the air and in broken play was world-class, MacDonald said.

The Chiefs' changed defensive system had settled in and they appeared to be holding onto the ball longer and scoring more tries as a result.

"They just look like they've got a spring in their step and the confidence and physicality is there," he said. 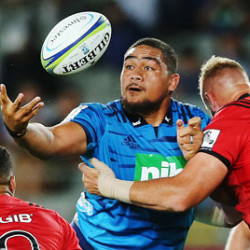 View all
Highlanders hitting their straps at the business end
Winning at home for the first time in 2021, the Highlanders completed a fine quinella in Sky Super Rugby Aotearoa by claiming the Blues' scalp 35-29 to go alongside that of the Crusaders they took two weeks earlier.
Three New Zealand referees selected for Tokyo Olympics
Referees James Doleman, Lauren Jenner and Selica Winiata are among 22 match officials selected by World Rugby for the Olympic Games in Tokyo.
Highlanders keep final hopes alive
Compelling leadership displays by halfback Aaron Smith, and his loose forward combination, helped the Highlanders to a 35–29 Sky Super Rugby Aotearoa win over the Blues in Dunedin on Friday.
Fans recall favourite NPC memories
The return of the iconic letters ‘NPC’ to the domestic rugby scene has brought back fond memories to rugby fans across the country.
Round 8 Preview: Gallagher Chiefs v Crusaders (2021)
The Gallagher Chiefs are on a hot run of form and will be eyeing payback for their round three loss to the Crusaders when they meet at FMG Stadium Waikato on Saturday night.
McKenzie given chance at 10 for Chiefs
All Blacks utility back Damian McKenzie's selection at first five-eighths for the Chiefs' Sky Super Rugby Aotearoa game with the Crusaders in Hamilton on Saturday has added to the intrigue around the clash.
McKenzie shifts to 10, Lachlan Boshier returns for Chiefs
The Gallagher Chiefs return home this Saturday to take on current Sky Super Rugby Aotearoa competition leaders and defending champions the Crusaders.
Mitch Drummond to notch up 100 games for the Crusaders against the Chiefs
The Crusaders will celebrate another big milestone this week, with halfback Mitch Drummond set to become the 20th Crusader to play 100 games for the club.
All Blacks Podcast with Aaron Mauger
One of New Zealand's greatest midfielders Aaron Mauger talks about his upbringing in Lyttleton and journey through the playing and coaching ranks in rugby.
Round 8 Preview: Highlanders v Blues (2021)
This is it for Tony Brown’s Highlanders. Win and their slim chances of making the Sky Super Rugby Aotearoa final is still alive. Lose and their final hopes are all but over. It’s equally as important for the visiting Blues who have the in-form Chiefs hot on their heels. While recent history doesn’t favour the Highlanders, with everything to play for, expect a cracking match under the roof in Dunedin.
Blues wary of hungry Highlanders side
Knowing what the Highlanders achieved when key players were stood down for their game against the Crusaders, the Blues would be wary of a Sky Super Rugby Aotearoa side further reduced by injuries in Dunedin on Friday.
Highlanders take positive approach to injury toll
Having made his mark on the Sky Super Rugby Aotearoa scene with his performance in the upset win over the Crusaders, fullback Connor Garden-Bachop's Highlanders season is over.
Chiefs Under 20s remain unbeaten after Day Two in Taupō
A dazzling 49-28 Chiefs win over the Crusaders dominated the Super Rugby Aotearoa Under-20 competition in Taupō on Wednesday.
Goodhue and Moody injury status confirmed
The Crusaders medical team has provided the following update on the injuries to Joe Moody and Jack Goodhue, sustained in the Hurricanes game on Sunday.
Settled Blues side named for showdown under the roof
While the Gordon Hunter Memorial Trophy is safely in the cabinet, there is still plenty at stake when the Blues venture south to take on the Highlanders in the Sky Super Rugby Aotearoa match in Dunedin on Friday night.
Next steps in Pacific Island professional teams' journey confirmed by NZ Rugby
In a significant step forward for Pacific Island rugby, Moana Pasifika and the Fijian Drua have been granted conditional licences to join a planned new professional competition next year, New Zealand Rugby (NZR) announced today.
Highlanders team named for crunch Blues clash
It’s a short turnaround for the Highlanders as they prepare to face the Blues on Friday night in Dunedin.
Talent-laden nib Blues women’s squad named for historic Super Rugby clash
A talent-laden nib Blues women’s rugby squad, that includes a plentiful posse of Black Fern internationals and thrilling young players, have been named today for the historic encounter against the Waitomo Chiefs Women in Auckland next month.
Waitomo Chiefs Women’s Squad Announced
The Chiefs Rugby Club today have confirmed their inaugural Waitomo Chiefs Women’s squad for the first-ever Super Rugby women’s clash in New Zealand.
Injury-hit Crusaders looking for a lift against the Chiefs
Competing against a resurgent Chiefs team would give the Crusaders an idea of where they are heading towards the end of the Sky Super Rugby Aotearoa competition.