No room for Lomu in Almanack selection He might have been the most dynamic force in world rugby, the most identifiable icon in the game, but that wasn't enough for Jonah Lomu to gain a place in the New Zealand Rugby Almanack's jubilee team for the years 1984-2008.

The celebrated statistical record of New Zealand's game, the Rugby Almanack, is celebrating its 75th year this year and several features honouring that achievement are incorporated in the latest volume.

Not the least controversial will be the selection of the jubilee team.

Lomu has to make way for Jeff Wilson and John Kirwan, who have behind them Christian Cullen, all three obviously impressive figures in their own right.

An interesting combination of Frank Bunce and Warwick Taylor makes up the midfield pairing. No room for Joe Stanley or Tana Umaga.

As far as backs go, no-one was going to supplant Dan Carter while the man deemed most capable of giving him the dream ride is Justin Marshall.

Wayne Shelford's powerhouse game at No.8 was a relatively brief exposure when compared the man who transversed the change from the amateur to professional era, Zinzan Brooke is relegated to the reserves.

Again there can be no argument with the choice of flankers Richie McCaw and Michael Jones. This is a choice made the easier by Jones' adaptability after his horrific knee injury which saw him spend the later years of his career on the blindside of the scrum.

Had there been another contender for that role, the final choice would have been all the more interesting.

Gary Whetton and Ian Jones are the editors' choices at lock while Carl Hayman, Sean Fitzpatrick and Olo Brown made up the front row. Some notable hard men like Richard Loe, Tony Woodcock and John Drake missed the cut in those roles.

And still they couldn't fit Lomu in!

A traditional feature of the Almanack has been the naming of its five players of the year and its Almanack XV.

The editors fell into the same problem as the All Blacks selectors in choosing their three-quarters and opted for centre Richard Kahui on the right wing ahead of Hosea Gear, Joe Rokocoko and the North Harbour twins Rudi Wulf and Anthony Tuitavake.

Conrad Smith was the choice at centre and Malili Muliaina at fullback.

The only other truly contentious position was at halfback where Jimmy Cowan headed off Piri Weepu's challenge.

The editors noted: "When Brendon Leonard was injured before the first test, it was felt that the All Black selectors would have to dig deep for a replacement. They did not have to dig deep at all.

"Waiting for them were Jimmy Cowan and Piri Weepu - both of whom had been through turbulent times recently - and both displayed regularly the form for the All Blacks that they had promised for several years.

"There was no settling in period - both delivered immediately."

One feature of the modern almanacks that many of those from the first 75 years did not have is the Happenings section by which some of the quirks of the season that might not normally warrant the attention of such a publication are included and this is always an interesting place to explore.

The gems are memorable, such as Wellington's 27-0 Ranfurly Shield success being the first time Wellington had held Auckland scoreless since 1896!

And another to excite ardent All Blacks fans was the news that the win over England at Twickenham in November was the first time any team had achieved seven consecutive wins against England.

With its records of comings and goings, and constant updates of the points scoring records, the Almanack continues to fill a vital place in New Zealand rugby. It deserves to survive and reach its ton. 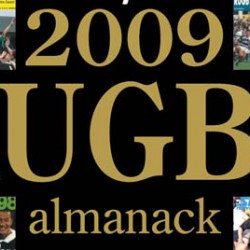