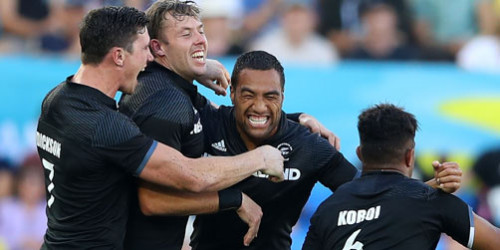 It was the fifth time out six occasions the Sevens have been played at the Commonwealth Games that New Zealand has won the title, their only loss being in Glasgow four years ago when they lost in the final to South Africa.

QUICK TAP: NEW ZEALAND WOMEN CLAIM HISTORIC GOLD MEDAL
Fiji, the reigning Olympic Sevens champions, fielded a team that had played at Hong Kong's Sevens last week while New Zealand had sent a different side and looked by far the fresher side in Queensland as a consequence.

Twice the Fijians, in the second half, had chances to score from breakouts in their own half, and normally they would have scored, but firstly Scott Curry and then Tim Mikkelson, the side's co-captains, each pulled off try-saving tackles which seemed to lower the spirit of the Fiji side.

They were down 14-0 at the break with a Fijian Sevuloni Mocenecagi in the sin-bin after a dangerous tackle on Sam Dickson.

New Zealand's tries came to Etene Nanai-Seturo after a kick through by Vilimoni Koroi which was taken by Curry who flicked an offload to Nanai-Seturo who stepped into a gap to run in the try.

And then halfway through the first half Regan Ware made the most of a Mikkelson turnover to create something almost out of nothing in a run which ended up beating tackle attempts from at least six of the Fijian side.

In the first half the Fijians were denied a suitable amount of ball and in the second they were forced into errors while playing catch-up and New Zealand, in the end, were comfortable winners.

New Zealand qualified for the final after a tough game against England. The English scored first when Daniel Bibby capitalised after New Zealand were unable to take advantage of an English mistake at the kick-off to start the game.

England lost the ball, New Zealand secured it, but were unable to get the ball transferred back and it was claimed by England who scored after 1min 17sec.

But securing the ball from England's re-start, New Zealand applied patience to hang onto the ball and work their way downfield where Mikkelson was able to throw a pass nearly half the width of the field to allow Ware to cross.

Then after the half-time hooter it was Nanai-Seturo who crossed after another sustained build-up.

England made the most of the re-start to build good field position but with time running out they scored when Ollie Lindsay-Hague got over with 37s remaining. England couldn't claim the ball from the re-start and when it fell on New Zealand's side it was quickly cleared to touch for a 17-12 win.