For all the wealth of information committed to print in the last 125 years regarding New Zealand rugby, a complete history has always been conspicuous by its absence.

Whether it was because rugby was just a game and therefore not worth the attention of any academic, or because the sort of people who played rugby were not the sort to be interested in all that had gone before, or any of the dismissive attitudes that invariably raise their heads when attention to rugby outweighs the emphasis that is perceived as not being paid to the arts and other endeavours, there remained a hole in the reference area that captured its complete history.

That has changed with Dr Ron Palenski's 'Rugby: A New Zealand History'. It tells the story of the game that, in spite of what some may believe, has captured the interest of New Zealanders like no other.

Palenski is part of a growing community, not only in the academic sphere but across the board, who appreciate that rugby is more than a game and it is beginning to take its place as an attachment worth far more than passing treatment it has received in the past. And the same attitude is applying to sport in general.

Management treatises of the virtues to be had in acknowledging the astonishing winning success rate the nation's top team, the All Blacks, have achieved in international play are becoming common.

Universities are starting to include Sport History papers in their offerings to students and people like Palenski are lending an academic approach to aspects of the game that have tended to be the area of newspaper journalists and enthusiasts who have recorded the development of the game through the various provinces that support the game in New Zealand. Theses are being written about aspects of the development of the game and academic journals have many more papers associated with rugby than was previously the case.

Palenski was one of the most influential sports journalists in the country before joining the exodus of much of the institutional sports experience associated with newspapers in New Zealand to pursue an academic career - the end result of which is a doctorate and a historian's approach to the subject that has occupied much of his twin careers.

The result is the long awaited history of the game represented in his latest book. It is not stretching the point too far to say that Rugby: A New Zealand History is Palenski's finest work.

He had already put to bed the myth that a printer or sub-editor's error in England was responsible for giving the All Blacks their name. But he reaffirms that research in this book, along with many other myths that have grown up.

One of these is the claim that a New Zealander, William Atack, gave the whistle by which referees now control games, to rugby in 1884. Palenski shows that claim may have been true in New Zealand, but evidence exists that a whistle was used in Australia a year earlier.

It is interesting also that while Robbie Deans was believed to be the first New Zealander to coach Australia the facts show that when Australia played their first Test, against Great Britain in 1899, the coach of the Australian side was Billy Warbrick, one of the famous New Zealand family who had been associated with the New Zealand Natives side to Britain, Australia and New Zealand in 1888-89.

Snippets on various aspects of the game, including music, warfare connections, political interest, art, the origins of the Bledisloe Cup and a wealth of others, are the subject of breakout stories in the text and provide a complete picture of the game and its moods.

It would be difficult to imagine that 'new' photographs might be available but there are many that capture aspects of the game through the years that enhance the text superbly.

By its nature, the book spends much time on the years preceding the 1970s. This is not surprising. The years previous were the time in which the legend was formulated and information of more recent times is often not so readily available, for any number of reasons, including closeness to events, and a lack of total perspective around modern happenings.

Understanding those nuances in the game will be the task of future historians, but those same historians will be able to rest assured that they have a significant foundation to work from on.

Nothing is ever a closed book, and there will be elements arise that are not included in Palenski's book, but they will be few and far between so well has the history been accounted for in this publication.

'Rugby: A New Zealand History' is the history the game deserves. 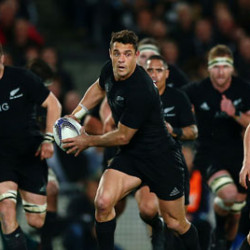