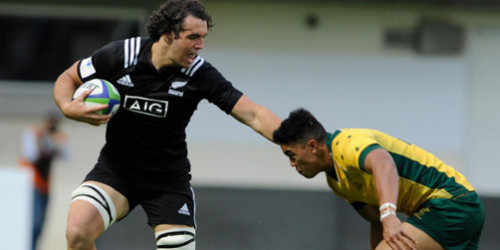 A touch of supreme opportunism by fullback Vilimoni Koroi provided the vital breakthrough for New Zealand's Under-20s in their 27–18 win over Australia at the World Rugby Under-20 tournament at Stade Aime-Giral in Perpignan on Friday (NZT).

New Zealand will meet France in their semi-final on Wednesday at 7am (NZT).

Leading 20-18 after an intriguing chess-like third quarter as both sides probed for an advantage, Koroi fielded an Australian touch kick after an effective counter ruck, and made a quick throw-in to centre Billy Proctor.

QUICK TAP: ALL BLACKS v FRANCE FIRST TEST PREVIEW
Proctor returned the ball immediately to Koroi who weaved his way through the spread Australian defence to give wing Jamie Spowart a clear run to the line and with first five-eighths Harry Plummer adding a fine conversion, New Zealand claimed an eight-point lead.

That was enough to see them head their pool ahead of the semi-finals while Australia were eliminated.

New Zealand captain Tom Christie said the game had been a 'real test'.

Playing Australia was always like playing a big brother with no-one wanting to lose or give an inch.

"That was the exact feeling out there. A lot of hard work went into it, it's a credit to the Aussies they put up a hell of a fight," he said.

"Aussie put really good territory pressure on us but once we could control that territory things started working for us and probably one of the key factors was winning that territory battle and it went both ways, that was why the match was so interesting," he said.

France would be up for the semifinal, he said, especially in front of their home crowd but New Zealand would also prepare hard for the contest.

Should New Zealand make the final they may have cause to thank the Australians for the significant contest they gave them by pushing them all the way – something that doesn't always happen in pool play at similar tournaments.

Christie almost provided the perfect start for New Zealand when latching onto some untidy Australian work at a goalline melee. He drove over the line and while a try was awarded a TMO check revealed he had not been in control of the ball.

But they had been playing under advantage and from the five-metre scrum New Zealand worked the ball and after some initial forward probes it was Plummer who cut through on the blindside to score four minutes into the game.

Australia latched onto a pass by Koroi and wing Jordan Petaia looked to take advantage but Koroi got back to cover his mistake with a tackle. Australia looked to move the ball wide but Australia's first five-eighths had his long pass attempt intercepted by New Zealand No.8 Devan Flanders and he had sufficient speed to head off the defence to score after a 50m run.

Plummer extended New Zealand's lead with an 18th penalty goal to 17-3. But as Australia attempted to work their way back into the game it was Stewart grubber kick through the New Zealand defence and Petaia chased through to secure the ball and flick an immediate pass inside to flanker Fraser McReight who raced in at the corner in the 28th minute.

That lifted the Australians who enjoyed a long period on attack and they were able to unleash their scrum power close to the New Zealand line. When penalties were conceded they opted for scrums and in the 36th minute had their reward with a penalty try, which also saw New Zealand tighthead prop Tevita Mafileo sin-binned.

The third quarter was a struggle for dominance with both sides landing penalty goals but it was Koroi who provided the spark for New Zealand to bring home the win.

However, New Zealand were forced to end the game without their skipper who was sin-binned with three minutes remaining for a ruck infringement.

Top of the list after match day 3 at the #WorldRugbyU20s. 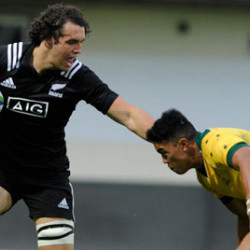