It was a three-way shoot out for the Oceania title with Australia and Fiji the other two teams gunning for a place at the Youth Olympics.

Day two was always going to be a lot tougher and was made even more so by an injury to Dhys Faleafaga. The key playmaker fractured a finger on day one and was ruled out of action as the tournament came down to the crunch on the final day.

New Zealand went down in 17-15 to Australia in a nail-biter before thumping Fiji 31-5 to set up the final against Australia.

New Zealand scored the first points with a successfully converted try scored by Iritana Hohaia. Australia responded immediately with a try of their own through Hagiga Mosby. In the final minute of the first half Jakiya Whitfeld was shown a yellow card resulting in a New Zealand try on half time for Montessa Tairakena.

The second half saw possession change hands often with no alteration to the scoreboard before a second yellow card for Australia saw Courtney Hodder miss the last two minutes of the game. Tairakena again took advantage to score her second for the match to put New Zealand up 21-7. Australia threw everything at New Zealand in the closing moments but couldn’t breach the line as New Zealand claimed the 21-7 victory.

New Zealand Captain Jazmin Felix-Hotham said, “We knew coming into this day it was going to be really hard and we are so happy to come away with a win and represent our country. Our goal was to win this tournament and we want to say a huge thank you to all our supporters and our families. Both the Australian and Fiji teams were real good quality and I hope they can keep building themselves to become even better.”

The victory means that New Zealand has gained the Oceania berth for the Youth Olympic Games but will need to wait on NZOC selection to attend.

The 2018 Youth Olympics will take place in Buenos Aires from 6-18 October. 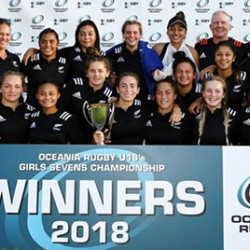