NZ Under 20s off to winning start at World Championships The New Zealand Under 20s have piled on the points against Georgia in their opening game of the Under 20 World Championships in Argentina.
They’ve run in seven tries to one to record a 45-13 victory in Santa Fe in just their second meeting with the Georgian’s in the tournament’s history.
It was a good first hit out for Craig Philpott’s side, who were trialing the new extended bench format introduced by World Rugby.
QUICK TAP: BLACK FERNS SEVENS AIM FOR WORLD SERIES CROWN
The World Rugby trial sees 13 players named on the bench, with eight players able to be used as replacements during the match.
Georgia opened the scoring in the sixth minute, with first five-eighth Tedo Abzhandadze kicking a penalty.
Shortly after, New Zealand and Chiefs winger Etene Nanai-Seturo was controversially yellow carded for a high tackle. However, that decision didn’t seem to affect New Zealand as they went on to score 12 points with 14 men on the field.
Taine Plumtree scored New Zealand’s first. It was virtually the first time New Zealand had possession. They put together some good attacking phases before Plumtree crossed the line.
Blindside flanker Samipeni Finau was massive for New Zealand on attack and defence. He set up their second try, breaking through Georgia’s defensive line before flanker Kohan Herbert scored like a winger in the left corner.

New Zealand denied Georgia a try in the opening half, going 13 phases of defence before turning the ball over and putting in a clearing kick.
Abzhandadze slotted another penalty before New Zealand went in for their third try. It was a patient build up, with midfielder Dallas McLeod eventually spinning out of a tackle to score.
It only took Georgia three minutes to strike in the second half, scoring their opening try of the game through lock Vakhtang Jincharadze. But it was short lived as New Zealand went on to score four more tries through Leicester Faingaanuku, Quinn Tupaea, George Dyer and Jeriah Mua who scored right on full time.
New Zealand captain Kianu Kereru Symes said after the match he was happy with how his side played but there was still a bit to work on.
“We did score some good tries, but they weren’t planned tries. We weren’t playing our structures, so that is a good work on for us. It was great that we kept our intensity up when our replacements came on so that was a good positive for us. It was a good start.”
Their next game of the tournament is against Scotland on Sunday 9 June at 6.30am NZT. Earlier today, Scotland were beaten by South Africa 43-19.
Scorers: New Zealand 45 (Taine Plumtree, Kohan Herbert, Dallas McLeod, Leicester Faingaanuku, Quinn Tupaea, George Dyer, Jeriah Mua tries; Rivez Reihanna 5 cons), Georgia 13 (Vakhtang Jincharadze tries; Tedo Abzhandadze con; Tedo Abzhandadze 2 pens). HT: 19-6

?? Ahead of their departure for Argentina, the #NZU20s side spent the day at @RowingNZ with double Olympic champion @kiwipair.

Don't forget to set your ? tomorrow morning. #NZU20s open their #WorldRugbyU20 campaign against Georgia at 4am NZT. Live on Spark Sport. pic.twitter.com/iMX9fbdlpS— All Blacks (@AllBlacks) June 4, 2019 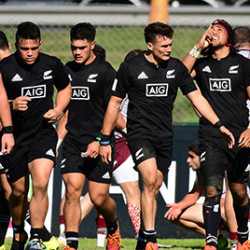