New Zealand Rugby (NZR) will kick off a new four-year licence to host a leg of the HSBC World Rugby Sevens Series, with an integrated men’s and women’s event in Hamilton next January.
World Rugby today unveiled a new-look schedule for the 2019-2020 season featuring eight tournaments on an expanded women’s circuit.
The 2020 HSBC New Zealand Sevens will be one of six combined men’s and women’s events next season along with Dubai, Cape Town, Sydney, Hong Kong and Paris, as the women’s game takes another leap forward on the international stage.
NZR Chief Rugby Officer Nigel Cass said the schedule reflected both the success of the HSBC New Zealand Sevens over the past two years and World Rugby’s commitment to grow the women’s game.
“Watching the women’s and men’s finals played back-to-back in front of a packed stadium in 2019 was an absolute highlight for players and fans. We’re thrilled to have the chance to repeat that format in 2020 with a full women’s field.”

WATCH ?? #BlackFerns7s playmaker @TylaNathanWong puts Gayle Broughton and Shakira Baker to the test to see which one of them knows her best! pic.twitter.com/RcRmEMlbbZ— Black Ferns (@BlackFerns) March 12, 2019

The final format for the 2020 HSBC New Zealand Sevens was yet to be finalised given the challenges around hosting the men’s and women’s draws over two days, Cass said.
“We are working with World Rugby to establish the best format for all of our stakeholders and are confident we’ll deliver another great experience for players and fans.”
Cass said NZR were talking to World Rugby and the Fiji Rugby Union about hosting the event in Fiji during the 2020-2023 cycle.
“Everyone has seen the contribution of the Fijian rugby community to the success of the tournament in Hamilton both on the field and in the stands. An option being looked at is alternating the tournament between Hamilton and Fiji and early negotiations are promising.”
Fiji Rugby Union Chief Executive John O’Connor said it was an exciting time for Fiji’s rugby community.
“We are grateful to NZR for offering to alternate the hosting of the HSBC New Zealand Sevens with Fiji and we're confident of delivering an amazing experience for everyone involved.

FREE ENTRY ?? #BlackFerns7s to feature in sevens bonanza in Pukekohe this weekend!

“Fijian fans would undoubtedly turn out in their thousands to support the tournament and we believe large volumes of overseas rugby fans would come along to experience Fiji’s hospitality and passion for Sevens rugby.”HSBC New Zealand Sevens General Manager Steve Dunbar said the 2020 tournament at FMG Stadium Waikato would continue to provide fans with a unique entertainment experience.
“We’ve worked hard with our event partner 37 South Events to deliver a fun-filled festival for all fans, including families. World class and thrilling rugby will always be the focus, but there’s also a real community festival feel to the weekend. We can’t wait for kick off in 2020.”
37 South Events Managing Director Dallas Fisher said it was great news for Hamilton.
"The Hamilton community has embraced the HSBC New Zealand Sevens and created one of the most highly anticipated weekends on the region's event calendar."
The full HSBC World Rugby Sevens Series 2019-2020 schedule and more information on the 2020-2023 cycle can be found here.
* Fans and media can keep up to date with HSBC New Zealand Sevens tournament by signing up to receive the latest information at www.sevens.co.nz

What a supporter to have in the stands at the @CanadaSevens ???? 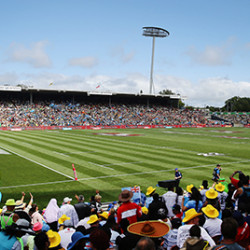