Oceania U20 Championship to return in 2019 He said it essentially allows our teams an opportunity to fine tune their preparations and combinations in a robust and high-level competition environment, similar to what they will encounter in pool play at the World U20s Championship in Argentina”.

“We welcome Japan back to the Gold Coast and look forward to the passion and pace they will bring to the Championship,” Schuster added.

Junior Japan’s Head Coach Yoshitake Mizuma said it is a privilege to be able to compete with the world’s best teams in this age-grade.

“We hope that our boys take advantage of this occasion to foster camaraderie through rugby, interact with many local people and learn about each other’s culture so as to grow as a person,” Mizuma added.

New Zealand won the 2018 Oceania Rugby U20 Championship and will be defending the championship title for the 5th time in a row in 2019.

“The format mirrors pool play at the World Championship and so we expect to be able to get a good gauge on how our players perform under the pressure of short turnarounds between test matches,” Philpott added.
He said it allows them to trial different combinations against quality opposition and to fine tune their game plan, while at the same time enjoying ourselves in a beautiful part of Oceania.
Fiji who as a result of their win at the 2018 World Rugby U20 Trophy in Romania will maximize this opportunity heading onto the World Rugby U20s in June.

“We are looking forward to building a new team for this competition since we’ve gone up to Tier One and those that played last year are no longer on the team, so it’s a new team and it will be a good learning curve before were go to the World Rugby U20s Championship,” Fiji U20 Head Coach Kele Leawere said.

Host team for the Championship the Junior Wallabies have been preparing well. Head Coach Jason Gilmore said: “It’s always great to be able to play at the Oceania U20s Championship, it brings together some of the best talent in our region.”

“New Zealand are our trans-Tasman rivals, so every opportunity we get to play them isn’t taken lightly,” Gilmore said.

“Fiji is always a world class side to run out against, they play a high-speed, expansive style of rugby, they’re a powerful nation and a side that can attack from all over the park.

“Having Japan back again this year will also provide us with a challenge, not only does it show how rugby is the dominant sport our region, but they also play a different style of game to both the Kiwis and Fijians,” Gilmore added.

Did you know that #MaoriAllBlacks lock Hoani Matenga was a founding member of @SIX60? Check out his surprise appearance at the band’s concert in Dunedin. pic.twitter.com/4MfnBVNDqm— All Blacks (@AllBlacks) March 13, 2019 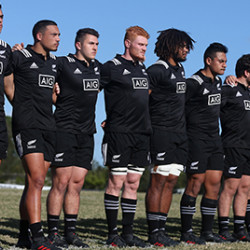