The Kiwi foreign legion is poised to have a huge impact on the World Cup in Japan with Six Nations champions Wales leading the charge.

At least six countries will have a Kiwi as their head coach - the All Blacks, Ireland, Wales, Georgia, Samoa and Fiji - while others like England with John Mitchell, will have New Zealanders on their coaching staff.

QUICK TAP: SUPER RUGBY REVIEW - ROUND FIVE
Kiwis are scattered through the playing ranks of most teams and some have been heavily influential in the Six Nations.

Some, like Scotland’s Sean Maitland, may stand out in Japan as individuals but their teams will probably struggle to feature in the final.

Others like England’s Mako Vunipola, Dylan Hartley, Ben Te’o, Nathan Hughes and Brad Shields, could be serious contenders though Mitchell, who is in charge of defence, will be dismayed by their efforts in concededing 38 points to Scotland.

Wales have an intriguing Kiwi connection hoping to make history in Japan.

Former Blues first five Gareth Anscombe started four of Wales’ five tests and his combination with coach Warren Gatland in setting and executing tactics is a big part of their success.

Their grand slam Six Nations triumph moves Wales past Ireland into second on the world rankings and the 25-7 win against Ireland was their 14th on the trot.

It was their third grand slam under Gatland and if Graham Henry was the Great Redeemer when he was in charge of Wales then Gatland must have a nickname of North Korean proportions.

Unlike his coach, Anscombe’s struggled for acceptance in Wales but his performances in the Six Nations and cool head in the big win against Ireland must have convinced even the most hardened heart that he deserves his spot.

??? WRAP | @WelshRugbyUnion lift #SixNations title on the back of 20-point Gareth Anscombe haul.

It was Anscombe who chipped through for the Hunterville born, Palmerston North schooled, Hadleigh Parkes to score in the second minute of the match.

He finished with 20 points and scored 43 in his five tests , second to Owen Farrell’s 59 but well clear of Sexton with 23.

The Irish first-five is the reigning world player of the year but he’s been average in the Six Nations.

He seems to struggle under pressure.

Think back to the missed penalty against the All Blacks late in the Test in Dublin in 2013 which would have taken Ireland beyond seven points.
He missed and the All Blacks rallied to win 24-23.

Ireland have beaten the All Blacks twice since then and Joe Schmidt has done a wonderful job taking them to number two in the world (before the final round of the Six Nations).

Former All Blacks prop Greg Feek’s also done good work with the forwards, and the scrum in particular.

When Ireland beat the All Blacks in Dublin last year the rugby world got excited that Ireland might loom as a genuine threat at the World Cup in Japan.

It would be silly to write them off, but they do seem to have imploded under the pressure of being favourites.

They were poor against Wales and England, possibly because they’re uncomfortable with the expectations that have come with success, expectations the All Blacks live with every day.

They have, though, beaten the All Blacks, something Wales have failed to do since 1953.

Under Gatland they have learnt to win, and at times to win ugly, but can they do that if required against the All Blacks in Japan?

The brilliant story behind Jason Momoa's All Blacks jersey continues to unfold as Zinzan Brooke says he is "delighted" to see his jersey on the back of Aquaman! 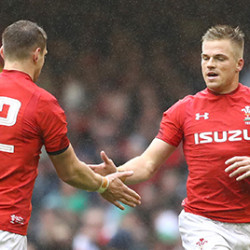