OPINION: The conference gap is closing What a difference a season makes.
This time last year we were wondering if we would ever see an Australian team taste victory over a New Zealand side again.

Aussie teams were in the midst of a miserable 40 match losing streak against New Zealand opposition in which it seemed like they had forgotten how to win against their Kiwi cousins. The starkest example being the Waratahs who found a way to lose to the after leading the Crusaders 29-0.

QUICK TAP: ROOKIE WATCH - A MOMENT TO SAVOUR
Fast forward one year and there’s no doubting that the tide is turning. And turning fast.

In the opening round of Super Rugby we saw the Hurricanes cling onto a one point victory over the Waratahs in front of a packed house at Brookvale Oval. If it wasn’t for an extremely rare shank from Bernard Foley, the Waratahs would have picked up the ‘W’.

That same round we saw the Rebels and Brumbies play out a highly competitive and entertaining match with the Rebels winning 34-27. In total nine tries were scored in a see-saw battle that was as skilled and exciting as anything the New Zealand conference could muster. The return of Quade Cooper added even more intrigue to the clash and his hushing of the Canberra crowd following the final whistle showed that there is still plenty of passion in Australian rugby.

On paper, Brad Thorn’s Reds side looked to be the weakest of Australia’s four teams. After a bye in the opening round they had the tough ask of opening their Super Rugby campaign at the Highlanders fortress of Forsyth-Barr Stadium.

No one on this side of the ditch gave Thorn’s troops hope of getting close to the Highlanders. A poll on the Super Rugby NZ facebook page even had a resounding 92 percent of respondents picking a Highlanders victory.

The Reds took no notice of the pre-match punditry and pushed the Highlanders hard throughout the full 80 minutes before coming up agonisingly short 36-31.

BEWARE OF THE BRUMBIES! After putting eight tries on the Chiefs, the Brumbies are looking for another NZ scalp in Palmerston North on Friday. Who are YOU picking to come out on top?

It was a pulsating encounter and one that introduced New Zealand fans to the prodigious talents of 18-year-old centre Jordan Petaia.
Petaia is the player Australia has been waiting to come along for a long time. An immensely skilled and physical ball runner, Petaia racked up 103 run metres (almost double the best Highlander) and bumped off Ben Smith in one of his many impressive carries.

But the Australian performance of the opening two rounds belonged to the Brumbies. In Canberra last weekend they completely out-played, out-thought and out skilled the Chiefs in a storming 54-17 victory.

It was a huge statement from the Brumbies, and when taking into account their first round loss to the Rebels, shows just how much the Australian conference has improved.

There was plenty of heartache when the Western Force were removed from Super Rugby. But that decision looks to be paying dividends now as the standard of the Australian conference gets better. 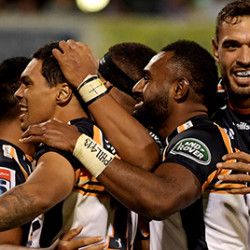