Papalii and Tuipulotu extend their stay with Blues and NZ Rugby The Blues and New Zealand Rugby have landed two key player signatures with All Blacks Dalton Papalii and Patrick Tuipulotu committing their immediate futures to the Super Rugby side and NZR.

21-year-old loose forward Papalii, who made his All Blacks Test debut on the Vista Northern Tour last year, has extended his stay at the Blues to at least 2022, while co-captain and lock Tuipulotu has committed for a further year until the end of 2020.

QUICK TAP: TOM ROBINSON RELISHING RISE WITH BLUES
“It’s great news for the Blues and for us that both Paddy and Dalton have re-signed with New Zealand Rugby,” All Blacks Head Coach Steve Hansen said. “Patrick has been in our environment for several years now and has all the natural attributes required to keep developing into a truly international lock. He has speed and agility for a big man and is strong in his core roles.

“Dalton has shown us all just what kind of impact he has on a game. He brings size to the loose forward role and also a huge workrate to his game, especially on defence and in the breakdown. He has a huge future in our game which is exciting and we congratulate him and Paddy on their commitment to New Zealand Rugby,” Hansen said.

Papalii, who made his debut for the Blues mid-way through last season, has become an integral part of the team. The loose forward is a two-time Development Player of the Year and was Rookie of the Year and Club Person of the Year in his debut season.

He was the only uncapped player named in the All Blacks squad on last year’s Vista Northern Tour and went on to play two matches, starting in the All Blacks 69-31 win over Japan and then came off the bench against Italy in Rome.

“Dalton is a product of our system, part of our development programme and we earmarked him as a future Blues player from a young age,” said Blues general manager performance, Tony Hanks.
“He has played (and captained) our Under-18s and Under-20s, successfully transitioned to the Blues and earned selection to the All Blacks following an outstanding Mitre 10 Cup for Auckland.

“He is not only an outstanding prospect on the field, he is a natural leader off it. He is already developing into a superb professional and we are thrilled he will be with us for a further three years.”

Tuipulotu, 26, has already played 21 times for the All Blacks since 2014 and more than 50 games for the Blues. This year he moved into the co-captaincy with Blake Gibson at the Blues, where he is developing as a real leader in the club.

“Patrick is clearly an immense figure in the game and possesses tremendous speed and skill for such a big man. We think New Zealand is still to see the best of him,” said Hanks.

?? With six months to go until the @rugbyworldcup kicks off, we remember back to when the All Blacks hit the streets of Tokyo last year! 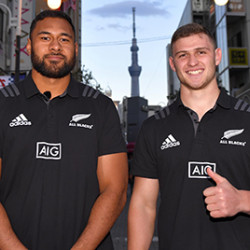