Patience proves a virtue for Chiefs in Melbourne

Outstanding patience from the Chiefs saw them score two tries in the last three minutes to claim a bonus point 27-14 over the Rebels in Melbourne on Friday.

The sides were tied at 14-14 with 14 minutes to go but the Chiefs took key chances with Damian McKenzie, who ended up playing much of the game at fullback, chiming in with centre Anton Lienert-Brown and lock Brodie Retallick to provide the winning example in the final stages.

QUICK TAP: CRUSADERS MAKE IT ANOTHER COMEBACK VICTORY
It was Retallick's offload in his own 22m in the last minute that saw Lienert-Brown give Shaun Stevenson a chance for the bonus point try on the right flank. Stevenson had been cramping and it was almost possible to see the pain on his face as he realized he was going to be given the ball to score from 40m out.

He got there and it was good reward for earlier efforts that had been denied him by the TMO.

The Rebels threw everything at the Chiefs' defence all night, but it held in spite of all the cork-screwing, diversionary running and attempted reverse passes. Fullback Jack Debreczeni was forever in the line looking to make ground.

It didn't help the home side that long-range goal-kicker Reece Hodge left his range finder at home in missing three first half attempts, none of them from difficult angles.

The only points came from a chance closer to the posts landed by first five-eighths Jackson Garden-Bachop. That was the only reward they could find while Liam Messam spent 10 minutes in the sin for a breakdown infringement.

Using the ball at every opportunity the Chiefs had reward after 21 minutes when from a big scrum they moved the ball on the blindside with Solomon Alaimalo making good ground down the sideline before being grounded just short of the line. From the ruck flanker Tom Sanders had the ball stripped and lock Dominic Bird grasped the ball and rolled over the goal-line for the only try of the half.

Stevenson was unlucky on two occasions when just making the slightest connection with the sideline. The first denied him a stunning try after following through on a kick ahead by Lienert-Brown while the second denied McKenzie a try after a quick lineout when it showed he had just edged the touchline.

The home side made another strong start, in the second half, and a clever back pass by Debreczeni to Garden-Bachop saw a long pass floated to flying wing Marika Koroibete go in at the corner.

With No8 Amanaki Mafi in rampant form, and well supported by flankers Colby Fainga'a and Jordy Reid, the Rebels continued to pummel the Chiefs defence. Garden-Bachop's second penalty took the lead to four points while the loss of wing Toni Pulu for lifting a player in the tackle resulted in his being sent to the sin[bin.

However, the effort took its toll on the Rebels and when able to utilize their bench to start stringing moves together the Chiefs took control. Flanker Tom Sanders made two strong runs to give the side valuable momentum and when a lineout close to the line was taken by Retallick to set up the maul. When the ball emerged after replacement hooker Hika Elliott attempted to get over it was Retallick who picked the ball and went over in the drive.

They repeated the effort from a 76th minute lineout which saw replacement Mitch Karpik drive around the back and give Sam Cane the chance to charge at the line and he got over beside the posts, but McKenzie's kick hit the post. Moments earlier he had landed the penalty goal that regained the lead 17-14. 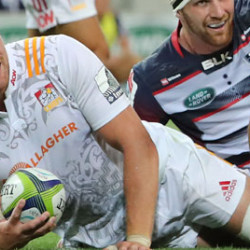