Plenty for All Blacks selectors to ponder 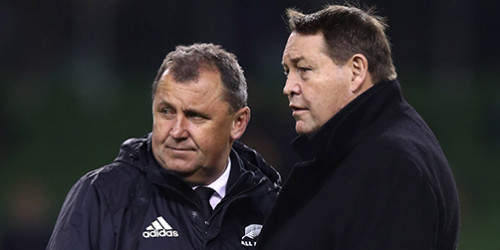 Blindside flanker remains the problem child for those of us unofficial selectors picking the All Blacks.

The two best flankers throughout Super Rugby have been Ardie Savea and Sam Cane, even though the latter has played only the tail end of the season.

He’s done enough in that limited time to remind us how good he is but also to suggest he could play in tandem with Savea, perhaps as the blindside.

QUICK TAP: INVESTEC SUPER RUGBY SEMIFINALS REVIEW
Steve Hansen’s not interested and that’s perhaps a good thing as it suggests he will pick specialists in his World Cup squad.

The duties of a blindside are considerably different to openside and Hansen is likely to use Liam Squire there as he’s finally injury free and will have shown enough with the Highlanders to slip back into the All Blacks.

Whetu Douglas has also been good for the Crusaders after earlier impressing at No8 and others like Vaea Fifita will be in the squad of 41 named Tuesday if not the trimmed down 31 for Japan.

But Hansen really needs Squire to remain fit and find the bruising, bullocking form we know he’s capable of.

Sonny Bill Williams is also likely to be named on Tuesday despite limited game time and not being in the four best performed midfielders.

It’s hard to shine when you’re not playing but in his absence Ngani Laumape and Ryan Crotty have been outstanding for the Hurricanes and Crusaders respectively.

The reality is Williams off the bench in a big test is still a force that is hard to resist. He is a proven game breaker and that history is what Hansen will rely on.

Hopefully he is bold though and prepared to accept his pecking orders in some positions have changed.

The best example of that is halfback where Brad Weber is now clearly in the top three.

Lock is interesting too as Scott Barrett has been so good for the Crusaders he is challenging the established partnership of Brodie Retallick and Sam Whitelock.

Retallick has had a Super season he’d probably prefer to forget as it’s been marred by injury and then, in the Chiefs quarter final, a performance riddled with errors.

He remains one of the best locks in the world but Retallick will be hoping for an injury free run through the Rugby Championship to get back into his usual form.

The back three is another place where Hansen needs to be bold.

Sevu Reece has his detractors, but that is for his off field behaviour a year or so ago, not for how he’s been playing for the Crusaders.

He, Ben Smith and Rieko Ioane would make a devastating starting trio with support from any of George Bridge (outstanding in the semifinal), David Havili, Braydon Ennor and Waisake Naholo.

Add to that, of course, Jordie Barrett who will be used as cover at first five in Japan, with the Highlanders Josh Ioane a chance for the initial enlarged squad.

Prop is a mixed bag with Owen Franks and Joe Moody clearly the best two but they’ve barely played for the Crusaders.

From an All Blacks perspective that’s actually good as they were fresh going into the playoffs and certainly won’t be tired when the World Cup arrives.

Karl Tu’inukuafe has slipped with the Blues but he and Ofa Tuungafasi are firmly in the mix along with one other from a bunch where no one has particularly stood out.

At hooker Liam Coltman was extremely good for the Highlanders late in the season and should have the edge on Nathan Harris as the back up to Codie Taylor and Danes Coles.

The first All Blacks squad of the year will be named at 7pm on Tuesday at the Ponsonby Rugby Club. Live coverage will be broadcast on SKY Sport 1. View all
Sky Super Rugby Aupiki set to light up rugby landscape in March
The countdown to the start of Sky Super Rugby Aupiki is officially on with the draw and naming rights partner announced this afternoon.
Segner relishing his time with the Blues
German-born Blues and Tasman flanker Anton Segner has set his sights on being a sponge and absorbing as much as possible to continue his meteoric rise in New Zealand rugby.
Scott-Young benefiting from Bunnings NPC experience
Australian Steamer Angus Scott-Young is looking to apply the lessons learned during the Bunnings NPC campaign for the Bay of Plenty Steamers to his Super Rugby Pacific season with the Reds.
Moana Pasifika dedicate pre-season game against Chiefs to Tonga relief efforts
Moana Pasifika have dedicated their first outing of the Super Rugby Pacific season against the Gallagher Chiefs towards raising funds for the ‘Ofa Atu Tonga’ (Love You Tonga) relief efforts in light of the recent eruption of Hunga-Tonga-Hunga-Ha'apai island.
Robinson and Blues seeking more success in 2022
Winning the Super Rugby Trans-Tasman title last year may have ended a long-running Blues drought, but no one in the side is under any illusions about that title's status.
Chiefs Manawa confirm coaching group for 2022
High calibre coaches, Crystal Kaua and Rodney Gibbs will join Chiefs Manawa Head Coach Allan Bunting as his Assistant Coaches.
Confident Perofeta to bring flair to Blues' Super Rugby campaign
Duane Monkley Medal winner in last year's Bunnings NPC, Blues five-eighths/fullback Stephen Perofeta has a bounce in his step heading into Super Rugby Pacific in 2022.
New Zealand's Super Rugby Pacific franchises have an extra training partner this year.
As part of a New Zealand Rugby initiative, referees from the New Zealand pool of Super Rugby referees no longer have to train alone.
O'Keeffe on Six Nations duty
Ben O'Keeffe is the only New Zealand referee appointed to Six Nations fixtures this year.
Moana Pasifika beefs up coaching group
Moana Pasifika has added Southland head coach Dale MacLeod and former Blues, Chiefs, and Sunwolves prop Pauliasi Manu to their coaching group ahead of Super Rugby Pacific.
England will be a danger at 2023 World Cup - Boyd
Chris Boyd will have a World Cup warning for the All Blacks when returning home later this year from his three-year stint as coach of Northampton in England's Premiership.
All Blacks Sevens sign new talent ahead of an exciting 2022
The All Blacks Sevens embark on a big 2022 with five new players in their ranks.
New era for Black Ferns Sevens
A new era for the Black Ferns Sevens kicked off on Wednesday with new players and coaching group setting their sights on the next three years.
Brumbies change their pre-season focus
Competing with New Zealand teams in Super Rugby Pacific in 2022 demands better dynamic skills, and that is where the Brumbies are putting their pre-season emphasis.
Fifita to join Llanelli Scarlets
Former All Blacks utility forward Vaea Fifita's foray with the Premiership salary cap at Wasps has resulted in him transferring to the Llanelli Scarlets in Wales.
Covid's possible effect on Six Nations
As Britain, Ireland, and Europe batten down the Covid hatches as the Omicron variant hits their countries, calls have been made for Six Nations Rugby to follow the Rugby Championship example and play all games in one country.
Revised Super Rugby Pacific draw confirmed
A blockbuster local derby between Moana Pasifika and the Blues at Mt Smart Stadium in Auckland on Friday 18 February 2022 will kick-off a revised Super Rugby Pacific draw announced by joint venture partners New Zealand Rugby (NZR) and Rugby Australia today.
New eligibility laws will make Tonga a threat at 2023 World Cup
Former Hurricanes loose forward Inoke Afeaki believes Tonga can have an impact at the Rugby World Cup in 2023.
Jimmy Gopperth now has his own kicking tee
Former Hurricanes and Blues five-eighths, Jimmy Gopperth is still knocking over goals in the Premiership for Wasps and doing it with a tool now bearing his name.
Seven All Blacks selected in Greatest all-time XV
Every year-end is a field day for list makers, especially in sport, and rugby has been no different in 2021.