Plenty to drive All Blacks Sevens in Sydney Attempting to breakthrough the stranglehold the United States and Fiji have taken on the HSBC World Sevens series will be the aim for the All Blacks Sevens in the Sydney leg at the weekend.

New Zealand has only won the Australian Sevens leg three times, and only once in Sydney in 2015-16. They finished third in 2016-17.

QUICK TAP: BLACK FERNS 7S SEEK SYDNEY REDEMPTION
They go into the tournament in third place on the series ladder but will be without skipper Scott Curry who is out with an ankle injury and Dylan Collier who has a hamstring injury.

Sione Molia has been named co-captain with Tim Mikkelson and said nothing would be changing in the team dynamic as they continued their way through the series.

They would miss Curry's leadership and workrate as well as his skill sets on and off the field but the depth available to the side was encouraging.

That had been borne out in Dubai when the All Blacks Sevens won the first tournament of the 2018-19 series when the players who covered the injuries showed they could cope with the demands.

Coaches and management were working really hard to grow the depth within the team, he said.

Molia said the last time he had captaincy duties was in Paris at the end of the 2017-18 series and it had been both exciting and enjoyable.

Sydney had its own demands on the players. Molia said the atmosphere was memorable but the heat was always a challenge.

"It's almost like a home tournament as well with all the Kiwis coming out and cheering us on," he said.

Set those reminders for the #AllBlacks7s pool matches, kicking off this Saturday:


Molia said the lessons from their third place finish in Hamilton last weekend were, "Learning the critical details we needed to execute through the weekend as well as the opportunities we missed out on and I guess going back and looking at what we do really well and focusing on all those little things."

Australia are the defending champions in Sydney but have had a disappointing year and are sitting sixth on the points table.

They have had injury concerns going into the tournament but captain Lewis Holland is confident Ben O'Donnell, who missed the Hamilton tournament after aggravating a knee injury he suffered in the Cape Town leg before Christmas.

"He'll be fine for this weekend and he's a big part of our team so he's resting up and recovering and he'll be ready to go," he said.

Another who could return is Jesse Parahi who also missed Hamilton due to a hip flexor injury.

"Jesse's a powerhouse. If we can get him out on the field this weekend no doubt he'll do some damage. He's not easy to take but for a big unit he's a bit of a twinkle toe as well, so he offers a great thing to the team," he said.

Australia are drawn with Argentina, South Africa and Tonga in their pool.

With Scott Curry ruled out of this weekend's #Sydney7s, we chat with Sione Molia who steps into the #AllBlacks7s co-captaincy role alongside Tim Mikkelson. pic.twitter.com/jiFZAqOhTv— All Blacks Sevens (@AllBlacks7s) January 30, 2019 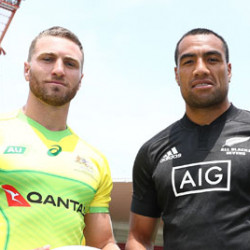 View all
All Blacks Sevens and Black Ferns Sevens take the field tonight in Toulouse
It has been well over two years since the All Blacks Sevens and Black Ferns Sevens took the field together in a World Series tournament, that all changes tonight at the Toulouse Sevens in France.
PREVIEW: Bunnings Warehouse Super Rugby Under 20
The Bunning Warehouse Super Rugby Under 20’s Tournament kicks off at Owen Delany Park in Taupō this Sunday, with 162 players looking to put their hand up for higher honours.
Securing a home quarterfinal motivates Gallagher Chiefs
Time is running out for the Chiefs to reclaim their best form, and they are determined to produce a quality performance at home against the Force in Hamilton on Saturday to secure a home quarterfinal.
Crusaders show depth with side to face Fijian Drua
Confidence in their squad depth has been shown by the Crusaders ahead of their DHL Super Rugby Pacific encounter with the Fijian Drua in Christchurch on Friday.
Gallagher Chiefs eye up vital win at home
The Gallagher Chiefs are hoping their fervent fans will flock to FMG Stadium to provide the energy for their all-important final regular-season home game against the Force in Hamilton on Saturday.
Injury replacements called into Black Ferns
The Black Ferns have been forced to make three changes to their Pacific Four Series squad, with Renee Wickliffe, Hazel Tubic and potential debutant Kelsey Teneti announced to be joining the team.
Blues named for Brumbies blockbuster
The Blues face one of their toughest tests when they travel to Canberra to take on the Brumbies in the penultimate regular-season clash in the DHL Super Rugby Pacific competition on Saturday.
Highlanders named for important clash with Waratahs
All games are crucial but at the business end of any competition there always seems to be more riding on results. The Highlanders are currently sitting in 8th and the final play-off spot, with just two more rounds to go, but will know that if they are to keep destiny in their own hands at least one or more victory is probably required.
TJ Perenara to skipper the Hurricanes against Rebels
The Hurricanes have named their side to take on the Melbourne Rebels this coming Saturday, in what will be their final home match of the regular season.
Brumbies excited about top of the table clash with Blues
Bouncing back from their loss to the Crusaders will be the goal for the Brumbies in their top of the table DHL Super Rugby Pacific clash with the Blues in Canberra on Saturday.
Five Talking Points: Pacific Four Series 2022
The much anticipated Pacific Four Series hits New Zealand shores next month, with the Black Ferns hosting Australia, Canada and the USA in Tauranga, Waitākere and Whangārei.
Crusaders named for historic clash with Fijian Drua
The Crusaders are back home and preparing to play their penultimate match of the DHL Super Rugby Pacific regular season at Orangetheory Stadium on Friday night.
Moana Pasifika named for Reds clash
Moana Pasifika has named their side to play the Queensland Reds at Brisbane’s Suncorp Stadium, at Friday 9:45pm NZT, in round 14 of the DHL Super Rugby Pacific season.
Liam Coltman to leave Highlanders at end of DHL Super Rugby Pacific season
When the final whistle goes for the Highlander’s Super Rugby Pacific campaign it will signal an end to Liam Coltman’s twelve-year, and over 135-game, involvement with the Highlanders. He has signed a two-year deal for the leading French Top 14 team Lyon, which is coached by former Highlander, Kenny Lynn.
Hurricanes after better start against Rebels
Knowing their DHL Super Rugby Pacific playoffs hopes were in their own hands would fuel the Hurricanes in Saturday's home game against the Rebels.
Highlanders determined to make most of home advantage against Waratahs
Making the most of playing at home will again drive the Highlanders to maintain their end of campaign revival when taking on the Waratahs in DHL Super Rugby Pacific in Dunedin on Sunday.
Bunnings Warehouse Super Rugby Under-20 tournament returns
Newly appointed New Zealand Under 20 coach Tom Donnelly will cast his eye over New Zealand Rugby’s (NZR) next generation of stars in Taupo next week during the second edition of the Bunnings Warehouse Super Rugby Under-20 tournament.
Kaipo Olsen-Baker set for huge 2022 season
Pulling on a Black Ferns jersey is going to be an emotional moment for No8 Kaipo Olsen-Baker, and she's ready for some tears.
Bunnings Warehouse NPC, FPC and Heartland Championship 2022 draws announced
Domestic rugby season preparations are in full swing with the 2022 season draws announced for the Bunnings Warehouse NPC, Farah Palmer Cup (FPC) presented by Bunnings Warehouse and the Bunnings Warehouse Heartland Championship.
Otago's Oceana Campbell selected as World Rugby's Youth Unstoppable
World Rugby spoke to the 18-year-old Youth Unstoppable about her life in rugby, finding out Kendra Cocksedge was a fan and why she believes more women and girls should play the game.