The All Blacks have the chance to wrap up the Bledisloe Cup for another year but will be wary of a Walabies side which scored four second-half tries last week when they clash in Dunedin on Saturday night.

SQUAD NEWS
The All Blacks have made four changes to the side that took out Australia 54-34 last week. All changes come in the forwards with Dane Coles recovering from a head knock to take his place in the number two jersey while Kane Hames and Scott Barrett come onto the bench in place of Wyatt Crockett and Luke Romano. In a late change, tighthead prop Owen Franks has been ruled out with an Achilles injury and is replaced in the starting line-up by Nepo Laulala. Australia have undergone a minor re-shuffle with Rob Simmons starting at lock in place of Rory Arnold. In the backs, Samu Kerevi has been excluded from the match-day 23 with Tevita Kuridrani coming into the starting side. Dane Haylett-Petty is also back from injury and takes his spot in the wing in place of Curtis Rona.

QUICK TAP: BOTH TEAMS WILL STEP UP A GEAR - ZINZAN BROOKE
FINAL QUARTER FRUSTRATIONS
Although the All Blacks will be satisfied with a 20 point win in Sydney, they will be concerned that they have lost the final quarter of their last three Test matches. The All Blacks structure seemed to slip away during the second half as the Wallabies ran in four tries to add some respectability to the scoreboard and send a warning shot for the second Test. Expect a lift in intensity from the All Blacks in the final 20 minutes as they look to improve this crucial area.

"We haven't won a last quarter for our last two or three Tests" - Ian Foster signals an area to improve in the second #BledisloeCup Test. pic.twitter.com/3xUhXktEM1— All Blacks (@AllBlacks) August 22, 2017

BENDER’S 2017 FINALE
After a heavy playing workload over recent seasons, Ben Smith will play in his final Test of 2017 before having a recovery break until the 2018 Investec Super Rugby season. After scoring against Australia last weekend, Smith is now second-equal with Richie McCaw on the all-time Rugby Championship try-scoring list with 17 tries. Smith has often spoken of his fondness for playing under the roof in Dunedin and will be out for a big performance in his final outing of the year.

"It's an awesome place to play rugby" - Ben Smith speaks ahead of his final Test of 2017!

DANE’S 50th TEST
After battling with injury throughout 2017, Dane Coles has been cleared to play his first Test of 2017. It will be extra special an extra special return for Coles with the Test marking his 50th appearance for the All Blacks. Coles said that he is excited to pull on the black jersey again and had a simple reason for his success: “I've just tried to be true to myself, go out and express myself.”

Dane Coles will play in his 50th Test for the #AllBlacks in the second #BledisloeCup Test vs Australia.

FAST FACT
The All Blacks have won six games in a row against Australia, with an average of 40 points scored in all of those matches. 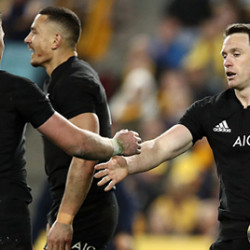