Missing a number of experienced names who are preparing for next weekend’s Test against England, the All Blacks will blood eight debutants in what promises to be a highly entertaining Test match against a rising Japan side in Tokyo.

LIVE STREAM
The All Blacks v Japan Test match will be available to live stream to selected countries for FREE thanks to Team All Blacks. Click HERE to see if you can watch in your country.
QUICK TAP: LEGACY OF NUMBER SEVEN JERSEY LOOMS LARGE FOR PAPALII
DASHING DEBUTANTS
The All Blacks have made a stack of changes to the team that defeated Australia 37-20 last week in Yokohama with eight new caps ready for their first taste of Test rugby. In the starting fifteen, loose foward Dalton Papalii and mid fielder Matt Proctor will get an early taste of Test action while the other six new faces will debut from the bench: prop Tyrel Lomax, loose forwards Gareth Evans and Dillon Hunt, halfback Mitch Drummond, first five-eighth Brett Cameron and outside back George Bridge.
IMPROVING JAPAN
This will be the fourth official Test match that Japan have played against the All Blacks, and they have closed the gap on every Test prior. After blowing out to the All Blacks 145-17 at the 1995 Rugby World Cup in South Africa, Japan were a touch better at the 2011 World Cup in going down 83-7 in Hamilton. Their most impressive effort was in their most recent Test against the All Blacks in 2013. Played in Tokyo, Japan lost the Test 54-6 but were far more competitive than their two previous encounters against the All Blacks. The fans in Tokyo will be hoping for another improved effort this weekend.

WORLD CUP PREP
With less than a year to go until the 2019 Rugby World Cup kicks off in Japan, this Test will cap off two weeks of crucial world cup preparation in Japan for the All Blacks. Last week, the All Blacks played at Yokohama International Stadium – the venue that will host the All Blacks opening game of the tournament along with the two semifinals and the final. This weekend’s Test will be held at the 49,000 capacity Ajinomoto Stadium in Tokyo. It will hold a number of key games during the tournament, including the All Blacks pool match against Namibia.

GUESS WHO’S BACK?
It’s been almost one year since world class hooker Dane Coles last pulled on the black jersey. The 56-Test All Black has battled through knee and calf injuries in 2018 which saw him miss the entire Investec Super Rugby season. After proving his fitness for Wellington in the Mitre 10 Cup, the All Blacks selectors were quick to call Coles back to the All Blacks fold. Codie Taylor has shown his class at hooker during the 2018 season and the return of Coles sets up an interesting challenge for the starting number two jersey with the Rugby World Cup approaching in 2019.

Guess who’s back?! Give us a ?? if you are looking forward to seeing Dane Coles back in the black jersey against Japan this weekend! #JAPvNZL ???????? pic.twitter.com/FRJSUfwd8V— All Blacks (@AllBlacks) November 1, 2018 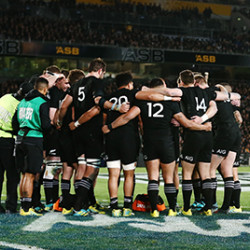