The much-travelled Maori All Blacks face the world No 30-ranked Chile in an historic first encounter to round out their three-match tour of the Americas.

It would be slightly unfair to say the Maori All Blacks took one step backwards last weekend in Sao Paulo after such an impressive tour opener against the USA Eagles.

The wet conditions, vocal crowd and staunch Brazilian defence combined to hold the Maori to a five try, 35-3, victory in what was probably the biggest game of 15s rugby ever played in Brazil.

Now they ready themselves for another historic challenge against Chile in Las Condes.

There are injuries, meaning Northland halfback Sam Nock is set for his Maori All Blacks debut off the bench.

After coming under real pressure against Brazil, the Maori must assert themselves in the scrum. The onus will not just be on the front-row of Tyrel Lomax, Ash Dixon and Ross Wright, but the entire forward pack.

Josh Ioane has dropped back to fullback, with Shaun Stevenson on the wing, two of eight changes from Brazil. New All Black Matt Proctor, one of several promoted from last weekend’s replacements list, will wear the No 13 jersey.

Chile was defeated 38-21 by a South American XV last weekend, which was coach Pablo Lemoine’s first assignment with the side. Fullback Pedro Verschae scored a brace.

Final prep done for the Maori All Blacks here in Santiago. Now just 1?? more sleep until they take on Chile in their final match of 2018.

This match will be live streamed for free in selected countries, get set up here ?? https://t.co/SekDP2kxx9 pic.twitter.com/W0oO0MKpdI— All Blacks (@AllBlacks) November 16, 2018 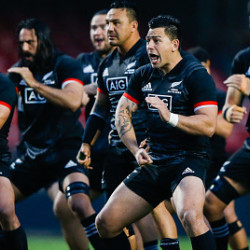