The Maori All Blacks will be looking to bounce back from last week’s shock loss to Fiji when they meet again at Rotorua International Stadium on Saturday night.

SQUAD NEWS
Maori All Blacks coach Clayton McMillan has retained faith in the playing 23 that played Fiji in Suva last week. In addition to a few positional changes, the main switch in this week’s team sees five of last week’s reserves pick up starting positions in Rotorua this weekend. Among them are loose forward Whetukamokamo Douglas and halfback Bryn Hall, who along with Alex Nankivell, Jordan Hyland, and the lofty Pari Pari Parkinson will all run on for the Maori All Blacks this week. They swap with Akira Ioane, Te Toiroa Tahuriorangi, Fletcher Smith and Teihorangi Walden who join hooker Nathan Harris as critical impact players from the bench.

QUICK TAP: FIVE UNCAPPED PLAYERS NAMED IN ALL BLACKS
REDEMPTION WANTED
After suffering their first loss to Fiji last weekend in 62 years, the Maori All Blacks are desperate for an improved performance on home turf says lock Tom Franklin. It was a bit of a smack in the face but the boys are keen for a bit of redemption. We've been working really hard and everyone has been doing their part behind the scenes to get ready to prepare to go to battle again and try and redeem ourselves. We're very excited about the opportunity and can't wait,” Franklin said.
WHETU ON THE RISE
It has been a rapid rise for Whetukamokamo Douglas since returning to New Zealand from Italian club Treviso in 2018. The hard-running No.8 quickly established himself as a key figure in the Crusaders championship winning team and was even touted for All Blacks honours in some quarters. Although he missed selection in the All Blacks Investec Rugby Championship squad, Douglas now gets his chance to start at No.8 for the Maori All Blacks with Akira Ioane shifting to the bench. While imposing with ball in hand and on defence, Douglas is a genuine leader and will provide a guiding hand for some of the youngsters in the Maori All Blacks pack.

COACH’S WORD
Maori All Blacks coach Clayton McMillan said the team had prepared well all week in Rotorua and was looking forward to playing in front of their home fans. “This is a special match for many of us who have never experienced the Maori All Blacks playing at home in front of our whanau and friends. We are very excited about having home crowd advantage and we really hope our supporters come out in force on Saturday,” said McMillan. 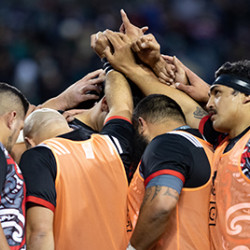