PREVIEW: Maori All Blacks vs Fiji SQUAD NEWS
The Maori All Blacks have named five new caps in the team with Fletcher Smith starting at fullback and Nathan Harris, Haereiti Hetet, Alex Nankivell and Jordan Hyland on the bench. There is a genuine international class feel to the Maori All Blacks with Te Toiroa Tahuriorangi, Akira Ioane, Nathan Harris and Bryn Hall all unlucky to miss out on All Blacks selection for the Rugby Championship and a number of others also knocking on the door.QUICK TAP: DIFFERENT START WON'T AFFECT THE ALL BLACKS
COACH’S WORD:
Maori All Blacks coach Clayton McMillan said his side is looking forward to the challenge of taking on the world’s number nine ranked team in their back yard.“We have a proud tradition of playing the passionate and highly skillful Fijians. We have relished every one of our 29 encounters, and I know that ranked in the world top 10, Fiji will be playing with more than one eye on their Rugby World Cup campaign. We have named a strong side to reflect what we think is going to be a great contest,” McMillan said.

KEY CLASH
Buckle in for a heavyweight clash in the eight jersey with Akira Ioane and Fijian powerhouse Viliame Mata squaring off. At 1.96cm and 116kg, Mata is slightly bigger than Ioane (1.94cm and 113kg) and just as athletic. Both players excelled on the sevens stage early in their career with Mata winning a gold medal at the 2016 Rio Olympics. Considered among the most destructive ball-runners in world rugby, Mata will face a big challenge from a man ready to make a statement to All Blacks selectors ahead of the 2019 Rugby World Cup.

Get the lowdown on the Maori All Blacks vs Fiji match in Suva on Saturday from the Kick Off crew.

CENTRES OF ATTENTION
Injuries to Semi Radradra, Jale Vatubua and Josh Matavesi have provided an opportunity for former sevens stars Levani Botia and Waisea Nayacalevu to start in the midfield for Fiji. The pair offer a genuine game breaking combination for Fiji and will be closely watched by Highlanders pair Teihorangi Walden and Rob Thompson in the midfield. 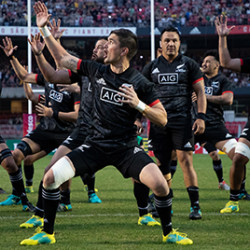