The clash between these two bitter rivals closes the chapter on an important first 1000 Tests in women's rugby and opens the door to an exciting future for the women's game.

MISSING IN ACTION: Fullback and vice captain Victoria Grant returns to the side after a year out with a serious back injury to be named in the starting side.

Meanwhile, England are missing six experienced campaigners who have amassed 248 caps between them on the tour.

Among them is 63-cap flanker Maggie Alphonsi, the 2006 IRB Women's Player of the Year. A big loss at the breakdown, Alphonsi is joined by 54-cap fullback Danielle Waterman, flanker Hannah Gallgher, halfback Georgina Gulliver, experienced hooker Amy Turner and utility Fiona Pocock as players who didn't make the tour through injury.

FORM: Form is always difficult to gauge given the sides have vastly different build-ups, but there is one common denominator: Sevens.

Both teams took part at the Rugby World Cup Sevens with differing fortunes.

After beating England 24-7 in the quarter-final, New Zealand moved on to secure the women's World Cup with a clinical 29-12 win over Canada in the final.

Former professional netballer Portia Woodman's star continued to rise in leaps and bounds as she finished the tournament with an incredible 14 tries. Woodman's transition to Sevens started 11 months ago, and Saturday's match will be her first in the 15-a-side code.

England were eventually downed 5-14 in the plate final, with Rachel Burford scoring for the English in that match.

The visitors come to New Zealand with some tough matches behind them. A bruising Six Nations saw them lose 0-25 to Ireland and 20-30 to France to finish third overall.

Captain Sarah Hunter led from the front with four tries in the championship to finish as the joint-second highest tryscorer, but any polish that came with a six-match unbeaten streak against the world champions has faded within some three months.

They'll take confidence from their come-from-behind 20-16 win over Wales, however, and know they have the character to beat top sides when they apply themselves.

WE THINK:
If New Zealand want to stamp their authority early in the series then they will have to be clinical against a thoroughly experienced England side.

The team has x factor in the form of Woodman and Kelly Brazier, while captain Fiao'o Faamausili and vice-captain Victoria Grant have the maturity to settle the team when the heat comes on.

There's no doubt that England will show up within a week of landing in New Zealand. Despite the absence of Alphonsi, England still have experienced players like Rochelle Clarke (78 caps) who know what to do in pressure situations. A lot of the newcomers, too, have experience in beating the hosts so will be bringing confidence into Saturday's game.

England always seem to rise to the occasion as they had done in the last six Tests against New Zealand, but this time they're playing in New Zealand conditions and the 24-hour flight from London to Auckland will no doubt have disrupted their preparations.

Wet and wintry conditions are forecast for Auckland come Saturday and it remains to be seen who will be able to conquer the conditions first. We're picking the hosts by two scores with conditions the telling factor in what should be a clash befitting the 1000th women's Test. Black Ferns by 12 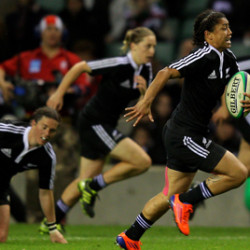