Proud Chiefs have to concede to Jaguares Game as the Chiefs' end-of-season recovery had been, it wasn't enough to deny a superb home effort by the Jaguares to advance to the Investec Super Rugby semifinals on the back of a 21-16 win in Buenos Aires on Saturday (NZT).

The Chiefs enjoyed a significant scrum advantage but they were unable to capitalise on it.

QUICK TAP: MO'UNGA LEADS CRUSADERS TO SEMIFINALS
Outstanding Jaguares defence denied the Chiefs at a crucial stage, 10 minutes out from the end when one last burst was made by the Chiefs to turn the scoreboard but the handling issues which had marred the effort all night returned to haunt them and a Jaguareas goalline clearance by halfback Tomas Cubelli took the ball back to halfway where the Chiefs' other problem of their night, their faulty lineout throwing, saw another penalty conceded.

Whenever the Jaguares had the option they chose to take lineouts. The Jaguares won twice as many turnovers as the Chiefs threw caution to the wind in the final quarter, but to no effect in the end.

Making the best possible start, the Jaguares scored almost from the kickoff. The Chiefs secured the ball but in attempting to drive the ball out of their 22m area, prop Angus Ta'avao's attempted offload to lock Brodie Retallick didn't go to hand and the home team seized on it, mounted three quick rucks and it was flanker Pablo Matera who drove over for the try.

That didn't deter the Chiefs and they regrouped and looked to patiently bring the ball forward at every chance. For long periods they were constrained by determined Jaguares defence. But cracks began to appear and halfback Brad Weber was quick to seize chances.

The Chiefs also made effective use of inside balls while first five-eighths Jack Debrezeni made good ground also when taking the ball to the line. It was after one effort in the 29th minute that the Chiefs got into a good midfield position. No.8 Pita Gus Sowakula and wing Sean Wainui gained position with drives ahead.

Weber sniped around a ruck and into the least patrolled area of the Jaguares defence. His speed put him clear and when confronted by a defender flanker Lachlan Boshier was on hand to take his pass and score beneath the posts.

The Chiefs claimed the lead in the 35th minute when their scrum power won a penalty and Debreczeni added the three points.

After the Chiefs went to the break leading 10-8, Debreczeni added a second penalty goal three minutes into the second half but suffered a groin strain and left the field to be replaced by Marty McKenzie who landed another penalty goal in the 47th minute.

Brad Weber at his best!

However, a switch of desperation appeared to lift the home side. They looked to move the ball more and bring their dangerous backs into play. The Chiefs were forced to desperate defence several times as overlaps regularly occurred.

From one strong move after a penalty conceded the ball was worked wide to give left wing Matias Moroni all the space in the world to get to the line in the 50th minute while a penalty conceded in the 54th minute allowed first five-eighths Joaquin diaz Bonilla to reclaim the lead with the goal.

Another breakdown penalty in the Chiefs' 22m area allowed diaz Bonilla to extend the lead to 21-16 in the 59th minute.

The final quarter ebbed and flowed but the lack of precision as the Chiefs were forced into catch-up cost them in the end. The Jaguares achieved their first home semifinal, four years after first competing in the competition. 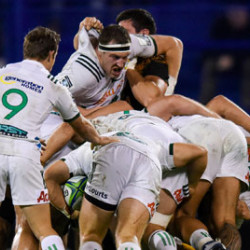