Rampant All Blacks finish season on a high 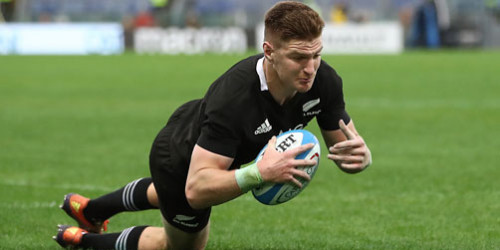 Putting 10 tries on Italy, the All Blacks bounced back from their Ireland loss by taking a 66-3 win in Rome with new wing Jordie Barrett leading the assault when running in four tries.

Fullback Damian McKenzie added another three on what proved the perfect season finale with many of the side's lesser lights taking advantage of their opportunity to keep the home side tryless, and never looking like getting over the line in slippery conditions.

QUICK TAP: SIX TALENTED ATHLETES EMERGE FROM RED BULL IGNITE7
Skipper Kieran Read gave a clear demonstration of leadership from before the game when leading the haka and then getting into the action with a series of plays in midfield, and in lineout work, to cast a masterful impact over the game.

Similarly, hooker Dane Coles who unleashed months of frustration in a free-flowing display of his fine all-round skills, finding the outside channels especially productive in linking play in several of the All Blacks' tries.

Able to play at pace, the All Blacks carved up the Italian defence and when there were issues getting through, the grubber kick proved effective in turning the defence around.

Jordie Barrett dispelled any concerns there may have been about his ability to play on the wing with a confident display while taking advantage of their chances for action were lock Patrick Tuipulotu and flanker Vaea Fifita while the midfield pairing of Ngani Laumape and Anton Lienert-Brown were highly effective.

Quickly settling into their game, from a quick lineout, the All Blacks moved the ball to Tuipulotu in midfield and then turned the ball back to fellow lock Scott Barrett, who had Coles doubling around him to feed right wing Jordie Barrett. Running along the sideline he made the pass inside to halfback TJ Perenara who was unchallenged to run in a seventh minute try.

Turnover ball was secured by Coles on the back foot in the 12th minute, but when ball was released it was Read standing off who slipped a short ball to Tuipulotu running on the angle and into space, provided perfect ball for fullback Damian McKenzie to run in under the posts.

Referee Andrew Brace was caught in a collision with players in a tackle situation and had to be replaced by Pascal Gauzere in the 23rd minute.

Speed of execution after a scrum penalty allowed the All Blacks to claim a lineout in Italy's 22m area. Lienert-Brown cut back to set up the ruck, and Beauden Barrett slipped a left-footed kick through with McKenzie winning the chase to the touchdown.

Ball manipulation after flanker Ardie Savea turned the ball over from a rare Italian sortie in the All Blacks' 22m area, saw the patient probing finally creating an opening with Coles on the outside to work with McKenzie to put Jordie Barrett away down the right flank to score in the 31st minute.

Consecutive penalties in the Italy 22m area saw the All Blacks pack take control to maul the ball. On the second occasion when cleared, Beauden Barrett took the advancing Italian defence line out of play by chipping a high kick to the corner where brother Jordie soared high over Italy fullback and fellow Taranaki product Jayden Hayward to score his second try after the halftime siren.

Striking immediately after halftime, the All Blacks sucked in the Italian defence and it was Read, in midfield, who took the tackle and made the offload to Laumape who ran back on a slight angle to punch into space for the try.

Two minutes later in the 45th minute, Italy attempted a long throw over their lineout only to see Beauden Barrett read it perfectly to take the ball and run 50m for the try.

Having started to introduce their substitutes, the All Blacks worked a quick lineout which took play back into Italy's 22m area with the home side deflecting the ball into touch. From the lineout, replacement first five-eighths Richie Mo'unga slipped a kick through and McKenzie score his third to bring up the half-century for the All Blacks.

Jordie Barrett, also completed a hat-trick, his last coming courtesy of a superb kick through off his left foot by replacement hooker Nathan Harris seven minutes from the end of the game.

Barrett was in again as the All Blacks moved the ball after the final hooter and with a Laumape long pass finding Mo'unga whose quick pass gave the big wing the chance to run in his fourth. 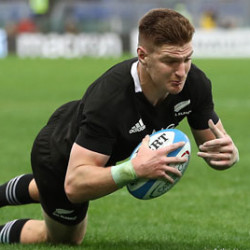 View all
Eden Park sold out for RWC21 opening day
Tickets to the opening match day of Rugby World Cup 2021 have sold out with a record-breaking crowd set to fill New Zealand’s national stadium at Eden Park on 8 October.
Podcast with Black Ferns Theresa Fitzpatrick, Ayesha Leti-l’iga and Natalie Delamere
Ahead of the world-record opening match of the Rugby World Cup at Eden Park, catch up with Black Ferns Theresa Fitzpatrick, Ayesha Leti-l'iga and Natalie Delamere.
‘We’ve thrown everything at it’ – Sir Graham Henry
Five times winners of the Women's World Cup, New Zealand face the most determined assault on their status in the game over the next six weeks, but coach and former All Black and coach Wayne Smith said they are throwing everything at the tournament.
Black Ferns ‘ready’ for World Cup opener
Black Ferns coach Wayne Smith believes his side starts their Rugby World Cup campaign against Australia at Eden Park on Saturday, having made progress since he took over the side earlier this year.
Next generation of schoolboy talent selected in national teams
The next generation of New Zealand rugby stars have been found with New Zealand Rugby today announcing the 2022 New Zealand Schools, New Zealand Barbarian Under 18 and New Zealand Māori Under 18 Ngā Whatukura Boys teams.
Preview: Black Ferns v Australia (Rugby World Cup)
The ninth edition of the Women’s Rugby World Cup is set to kick-off at Eden Park on Saturday with an opening day triple header featuring the top three seeds in front of a world record crowd for women's rugby internationals.
Bunnings NPC quarterfinals: Preview and Team Lists
After nine rounds of regular season action, just eight teams remain in the Bunnings NPC to contest the quarterfinals this weekend.
Nepo Laulala extends commitment to New Zealand Rugby and the Blues
Nepo Laulala has committed to New Zealand Rugby (NZR) and the Blues for another year, officially extending his contract through to the end of 2023.
France ready to hit the ground running in the opening game
France, one of the sides considered a potential finalist, is looking to hit the ground running when playing South Africa in Saturday's Rugby World Cup opening game at Eden Park.
Black Ferns named for Rugby World Cup opener
The Black Ferns team to play in their opening match of Rugby World Cup 2021, in front of a record-breaking crowd, has been named.
Referees confirmed for November internationals
Australian referee Nic Berry has been appointed to the England-New Zealand Test at Twickenham on November 19 during the All Blacks northern tour.
Popular Katia brings up century in the Bush
When Inia Katia arrived in Masterton from Fiji more than a decade ago he had little idea he'd emulate his future father in law by playing 100 games for Wairarapa Bush.
Tuitupou hattrick helps sink Lions Under 19
New Zealand Under 19 team have finished their tour of South Africa undefeated after a comprehensive 42-10 victory over the Lions Under 19 side at Emirates Airline Park Stadium, in Johannesburg.
England women draw inspiration from football team
England is the red-hot favourite to win the Women's Rugby World Cup starting in Auckland on Saturday and is drawing inspiration from their football team, who won Euro 2022 earlier this year.
New Zealand Under 19 named for final game in South Africa
The New Zealand Under 19 team has been named to take on the Lions Under 19 side at Emirates Airline Park Stadium in Johannesburg.
Are the days of stifling rush defences limited in rugby?
Encouraging signs have emerged in the early stages of England's Premiership.
Wallaroos undaunted by ‘world record’ Eden Park crowd
Wallaroos captain Shannon Parry is undaunted at taking on the Black Ferns in front of a world-record crowd, at Eden Park, in Saturday's Women's Rugby World Cup pool opener.
Black Ferns In World Cup Openers
The Rugby World Cup starts on Saturday when the Black Ferns tackle Australia at Eden Park.
Jordie Barrett commits to NZR and Hurricanes till the end of 2025
Jordie Barrett has officially put pen-to-paper on a new deal that will keep him in the capital with the Hurricanes and New Zealand Rugby (NZR) through till the end of 2025.
Victoria Grant has Aupiki and the World Cup on her mind
Victoria Grant was a winner throughout her distinguished playing career. The former Black Ferns captain won the World Cup in 2006 and 2010 and was recognised as New Zealand Women's Player of the Year in 2008.