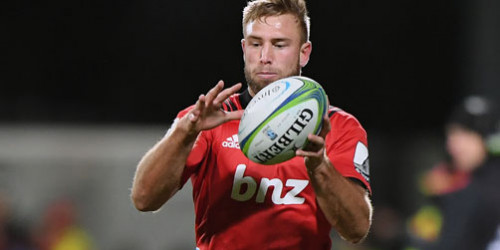 Any thoughts the Crusaders might have gone off the boil in recent weeks were emphatically discounted as they ran rampant over a hapless Rebels side to claim a scintillating 66–0 win in their Investec Super Rugby game in Christchurch on Saturday.

The Crusaders were relentless, playing the game at dazzling speed, homing in on Rebels mistakes and making the most of an assured display of tactical kicking by first five-eighths Richie Mo'unga, who had the ball on a string.

His wings Braydon Ennor and Sevu Reece scored hat-tricks each with Mo'unga having a key hand in most of them while fullback David Havili contributed another two. Apart from securing the home advantage in the playoffs they also allowed second five-eighths Ryan Crotty the final try of 10 in the game to mark his 150th game and he made the most of the chance to kick the conversion

The defensive pressure mounted by the Crusaders further compounded the frustrations for the Rebels who were given a lesson in the virtues of rugby intensity – and at the same time they rang out a warning to pretenders to their Super Rugby title.

Out to a 26-0 lead by the halftime break the Crusaders punished the Rebels' defence, as they missed 22 tackles to only six by the Crusaders. By game's end their misses rose to 37. Havili was outstanding and had 188 run metres, Reece 153 and Ennor had 112.

Starting with renewed purpose after their lack of success in recent weeks, the Crusaders opened up the Rebels' defence and moments after he had not quite held an intercept chance, Ennor was given a run down the sideline before chipping to the goalline where the Rebels carried the ball back over to gain a five-metre scrum.

Mo'unga saw Reece standing in open space on the right and lobbed a kick across for Reece to score the easiest of tries.

Mo'unga fashioned an opening down the left flank only to see his inside pass intercepted and the Rebels launched an attack into the Crusaders' 22. But the ball was turned over with centre Jack Goodhue taking the ball from the base, leaping over the ruck and slipping a short pass to Havili on the right flank. He stepped inside the defence and then cleared out to run all the way for a 15th minute try.

Ennor ran onto another Mo'unga cross kick, this time bending low to secure the ball, before linking with Havili. He cut back infield to set up a ruck which saw Mo'unga and flanker Whetukamokamo Douglas took ball towards the goalmouth. But quick ball from the breakdown saw the ball moved back to the blind with flanker Matt Todd giving Ennor the ball to go in at the corner.

The halftime hooter had sounded a minute when a Rebels kick ahead was immediately turned back at them by Mo'unga who fed Havili. He carried the ball ahead and while slipping the ball was sent back to Mo'unga who lobbed another kick to the wing where Ennor had the bounce go his way and he beat two defenders before delivering the killer blow for the Rebels.

The Rebels had their best chance in the opening moments of the second half when having enough opportunities to score but in spite of good work by No.8 Isi Naisarani, panic set in and poor options were taken. When a penalty was earned by the Crusaders the ball was sent downfield and before they had a chance to regather, the home team had made the most of a break by second five-eighths Ryan Crotty, who later provided superb build-up work for Reece's hat-trick try.


Reece received the ball on the right wing and racing down the sideline he passed inside to halfback Bryn Hall and it was like a 14-point turnaround. It got worse two minutes later, when the Rebels were penalised on the Crusaders 22m line. Hall took a tap penalty and centre Jack Goodhue had Mo'unga outside him. He took the gap then fed Reece again.

He kicked ahead and while Reece Hodge was back in cover, somehow the ball eluded him and Reece regathered to score his second.

Then as if running the ball wasn't enough, a 56th minute five-metre scrum after flanker Matt Todd had been ruled to be held up over the line, No.8 Kieran Read secured the ball, lobbed a pass to Mo'unga, who could have scored himself, who gave the five-points to Ennor. 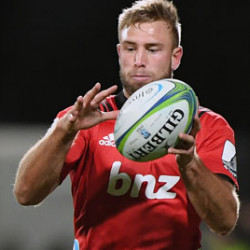