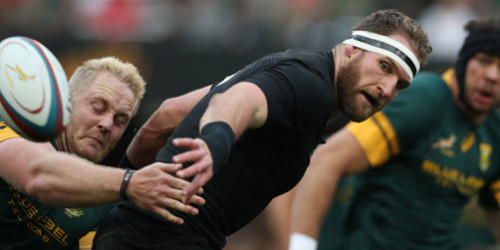 New Zealand completed a glorious Investec Rugby Championship when thrashing South Africa in a record-breaking 57–15 victory at Durban on Sunday (NZT) – a win that completed a clean sweep of victories in the series with maximum points on each occasion.

New Zealand, who scored nine tries in the win totalled 36 tries on their barn-storming run through the Championship, equalled the record of 17 Test victories, held by South Africa and themselves, on two occasions, and set up a record chance for themselves against Australia in the Bledisloe Cup Test at Eden Park in a fortnight.

QUICK TAP: GREAT TEAMS NEED TO DO WHAT OTHER TEAMS HAVEN'T DONE SAYS HANSEN
It was only a poor night with his goal-kicking boot from first five-eighths Beauden Barrett that spared further South African blushes.

It was their biggest winning margin against South Africa as the All Blacks completely dominated a side who, for the second week, failed to score a try.

South Africa relied on first five-eighths' Morne Steyn's boot and while he opened the scoring with two penalty goals there was an apparent inevitability as the All Blacks absorbed pressure and once they retained the ball the rout was on.

Ironically, it was when Steyn failed to find touch just out from the New Zealand goal-line, and the ball was moved back downfield by the Al Blacks that the try-scoring began. Centre Anton Lienert-Brown, who had another outstanding game, made the initial break and released the ball over the top to wing Waisake Naholo. Racing down the sideline he had halfback TJ Perenara in support and he carried the ball on.

The All Blacks arrived in support and lock Sam Whitelock and flanker Matt Todd featured in setting up ruck ball and when the chance came on the right flank it was a superb pass in the tackle from flanker Jerome Kaino that gave wing Israel Dagg the space to score the opening try in the 21st minute.
After a third penalty goal to Steyn, New Zealand stormed back onto attack and after a strong lineout drive from a penalty the ball was released in the 22m area and Lienert-Brown took play close to the line and Perenara broke, appeared to lose control of the ball before planting it on the line. The TMO was consulted and the try was awarded.

However, that was quickly sorted after the resumption when a superb display of control saw the All Blacks mount 20 phases in the Springbok 22m area to finally produce the chance for Dagg to score his second try.

Having lost a lineout in the 54th minute, the Springboks tried to move the ball on their own 22m line but when fullback Patrick Lambie attempted to put a kick through it was charged down by Lienert-Brown and kicked to the in-goal area where Barrett won the touchdown for the try.

The #AllBlacks have equaled the record for most consecutive Test wins by a tier one nation with 17 straight victories.#TeamAllBlacks pic.twitter.com/2HJF9bFmuv— All Blacks (@AllBlacks) October 8, 2016

Steyn landed a fifth penalty goal but two minutes later, in the 60th minute he attempted a midfield kick which was returned by Barrett. Fullback Ben Smith chased hard and won the contest. The ball was moved with Barrett running hard at the line to feed Read on the break. He passed to Dagg, who in-passed to hooker Dane Coles and he found Perenara in support to score his second try.

The introduction of the All Blacks' bench saw no diminishment of intensity and flanker Liam Squire played a big hand in the sixth try, when running blind from a ruck, drawing two defenders on the blindside before feeding Barrett who was unchallenged in a 40m run to the line.

South Africa paid the price for a shoulder charge on Wyatt Crockett by replacement lock Lood de Jager 10 minutes out from the end. From the resulting lineout penalty the All Blacks mounted a maul and it was replacement hooker Codie Taylor who scored.

Then Squire was in the action again after being fed into space by Lienert-Brown. He charged ahead and from the tackle the ball came to Barrett and when he was grounded just shot of the line he rolled on his back and flicked the ball to Smith for the try.

Squire rounded out the action himself after a kick ahead by Barrett after the final hooter was secured by Smith who got the ball to Squire and Lima Sopoaga landed a fine sideline conversion to complete a stunning performance.

FT | #AllBlacks run in 9 tries to wrap up a sixth straight bonus point win in the #RugbyChampionship.#RSAvNZL #TeamAllBlacks pic.twitter.com/Vt4tISuxcM— All Blacks (@AllBlacks) October 8, 2016 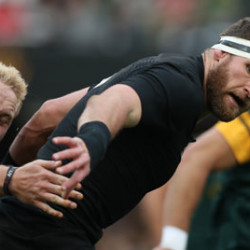