Chiefs coach Colin Cooper looked at the results of Investec Super Rugby at the weekend, and then at his players returning from injury, and felt the stars were aligning for his side ahead of a key game in Melbourne against the Chiefs on Friday.

Being restored to something approaching full strength with the exception of Damian McKenzie and lock Michael Allardice, it was a boost to confidence having lock Brodie Retallick and hooker Nathan Harris back to join flanker Sam Cane in the side.

QUICK TAP: THE PLAYOFF RACE BOILED DOWN"It is a big week for the team and a big opportunity to get into the quarters [finals].

"This team has been fighting and refusing to die for the last month.

"We've had some good wins and we've had some poor losses and now I think it is all about moving on from all that. You saw what we can do when we get it right and I guess it is trying to bottle that and take it over to Melbourne and release it," he said.

While a bonus point win would go a long way towards helping the side make the playoffs, getting a win was the first priority. They had been in that position in their Fiji win over the Crusaders and they were unlucky when halfback Te Toiroa Tahuriorangi had lost the ball over the line.

Just like that, Sevu Reece is at the top of the rookie leaderboard! Can he hold his lead over Tom Robinson? ????

Cooper was confident with the quality of leaders he had in the squad that the right decisions would be made if they were in a position to push for a bonus point win in Melbourne.

At the same time he wasn't reading too much into the Rebels 0-66 loss to the Crusaders because they had rested players, including halfback Will Genia, because they knew the Chiefs game was going to be crucial for them.

"Win or lose, the winner takes all the spoils, so it is going to be a huge, massive game," he said.

The Rebels would bury the Crusaders loss and the Chiefs would keep doing what they were doing, he said.

There was a belief that had been in the side all along, but they had to overcome injuries to more senior players at the same time as they were trying to embed new systems and they had come through those frustrations.

That had been crucial in the way they beat the Reds, a result that gave them a lot of confidence and belief while the trip to Fiji had led to the realisation of players how lucky and privileged they were to play professional rugby when things were so tough in Fiji.

?? Can @JaguaresARG go all the way in 2019? @PiriWeepu takes a look at their chances on the latest episode of Extra Time! 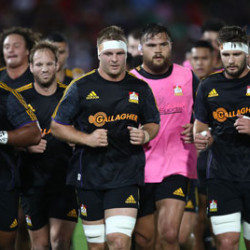