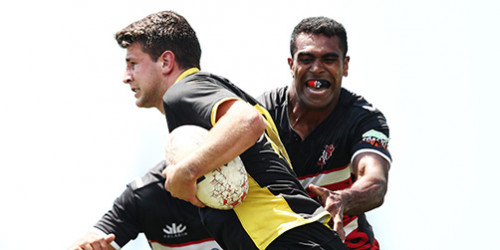 The rising stars of the New Zealand Sevens scene will assemble in Tauranga in January with their sights set on the 2019 All Blacks Sevens and Black Ferns Sevens Development teams.
Numerous domestic sevens tournaments, including the inaugural Red Bull Ignite7 and last weekend’s TECT National Sevens, have uncovered 51 players that will take part in two trials in January.
New Zealand Rugby’s High Performance Talent Development Sevens Manager Chad Tuoro said the domestic sevens season had uncovered potential stars.
“In the past two months there have been more opportunities than ever before for young players to get on the field and impress.
“And they have done exactly that, our game is in a good place when you see the talent that is coming through. Now our job is to bring them together and see who has the ability to take that next step.

WRAP | It was a historic day for Tasman men at the @NationalSevens while Manawatu continued their dominance in the women's competition.

“Our development programmes are proven pathways to the professional environment. Akuila Rokolisoa and Salesi Rayasi went from development team members to World Cup winners in 2018 and we have seen a number of development players graduate into the Black Ferns Sevens squad,” said Tuoro.
The All Blacks Sevens Development trial will see 28 players vie for places in the in 2019 Development team that will assemble for two camps. The trial will take place on 11-13 January.
Players attending the Black Ferns Sevens Development trial, from 14-18 January, will have extra motivation with four wider training contracts on offer, along with places in the 2019 Development squad.