Rookie Watch: Sevu Reece stands out in Round 11 Heading deep into the second half of the Investec Super Rugby competition, the chances for rookies are reducing but there was still enough opportunities for them to shine across an important weekend.

Here's our three standout rookies from round 11:

Given the three-quarters on call for the Crusaders it is essential to take chances when they come and wing Sevu Reece certainly did that in the win over the Lions. His first try, a bumping, bruising affair that left its mark on Kwagga Smith, and his chip ahead and recovery to score his second were complemented by his backline incursion and over the head of the defender pass to centre Braydon Ennor which set up a superb opening try for the Crusaders.
Games: 5
Tries: 6
Clean breaks: 20
Offloads: 11

STANDINGS | The @Highlanders are back in the top 8?. #RaiseTheStakes pic.twitter.com/O7pAJXXx4D— Super Rugby (@SuperRugbyNZ) April 29, 2019

2: Richard Judd (Hurricanes)
The Bay of Plenty half is always going to struggle for game time when TJ Perenara is available but as he showed against the Chiefs, he is not slow in showing his own skills. With the Hurricanes well on top by early in the second half he got an extended stint and made his own contribution with consistent distribution while also not being afraid to take on the Chiefs around rucks and mauls. His work on the blindside for Salesi Rayasi's try was perfect.
Games: 4
Carries: 12
Try assists: 2
Tackle success: 87
3: Kane Leaupepe (Hurricanes)
At 26, lock Kane Leaupepe is making his way impressively since being called up as injury cover for his first season of Super Rugby and while his opportunities have been reduced, he has still been able to make his mark. His try, from a lineout maul, out from the Chiefs line was a classic tight forward's effort, low to the ground and unstoppable. A true worker in the tight quarter he played a key role in the Hurricanes subduing the lively Chiefs pack.
Games: 3
Tries: 1
Carries: 12
Tackle success: 100
Leaderboard:
Tom Robinson: 14
Sevu Reece: 10
Will Jordan: 7
Liam Mitchell: 7
Du'Plessis Kirifi: 4
Richard Judd: 4
Etene Nanai-Seturo: 3
Folau Fakatava: 3
Bailyn Sullivan: 2
Tanielu Tele'a: 2
Tumua Manu: 1
Josh Iosefa-Scott: 1
Harry Plummer: 1
Kane Leaupepe: 1 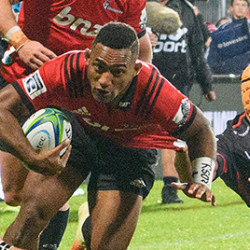 View all
Intensity of World Cup opener is what rugby, and coaching, is all about
It may be All Blacks coach Steve Hansen's fifth Rugby World Cup but he admitted attending World Cups was still the highlight of his career and he was excited heading into Saturday's pool opener against South Africa in Yokohama.
All Blacks team named for World Cup opener
The All Blacks team to play South Africa in their opening Rugby World Cup Test on Saturday September 21 at International Stadium, Yokohama has been named (Kick off: 6.45PM, 9.45PM NZT)
Juggling rugby and cricket an exciting challenge for Thamsyn Newton
Rugby has played a huge part in the life of Wellington Pride fullback Thamsyn Newton.
Erasmus knows all to well about the All Blacks-Springboks rivalry
Springboks coach Rassie Erasmus knows all about the rivalry with the All Blacks from the sharp end, playing against the long-time rivals
South Africa defence coach wary of All Blacks' system
Springbok defence coach Jacques Nienaber has spent a fair amount of time analysing All Blacks methodology over recent years and believes he understands what the team management are trying to do to break down defensive screens.
South Africa name team to face All Blacks
South Africa have named an unchanged side to the one that defeated Japan two weeks ago to face the All Blacks in the opening Pool B clash of the Rugby World Cup.
It’s on all of us to create something tribal around the FPC and women’s rugby
Wellington’s had some wingers over time. In fact, New Zealand Rugby has been blessed with audacious talent on the flanks year after year, seemingly since the dawn of time. We, New Zealand, and they, Wellington, have another.
Moore to take Black Ferns through to 2021
Black Ferns Head Coach Glenn Moore will lead the team through to the 2021 Rugby World Cup, New Zealand Rugby announced today.
Rugby World Cup Tournament Draw
Download the full 2019 Rugby World Cup tournament draw
World Cup or not All Blacks always under pressure
It may be a World Cup but that didn't change the pressure involved in being an All Black.
All Blacks brush of SA Retallick claims
All Blacks assistant coach Ian Foster brushed off comments from South Africa's camp that injured lock Brodie Retallick would be playing in Saturday's first World Cup game for the sides.

Familiarity an asset for All Blacks in opening Cup game
Prior experience has been a useful asset for more senior members of the All Blacks as they prepare for their World Cup opening game against South Africa in Yokohama on Saturday
Execution the key for All Blacks in Cup opener
Improvements in the execution of the All Blacks' attack game is high on the selectors' menu for their opening World Cup game against South Africa on Saturday.
Third tournament but Whitelock feels the excitement
All Blacks lock Sam Whitelock has played 19 Tests against South Africa in his career but is just as excited about his 20th in the World Cup opener on Saturday as he was about his first in Auckland in 2010.
Dan Carter compares best five-eighths in world
All Blacks great Dan Carter has offered his comparisons of how the three leading first five-eighths in the world, Beauden Barrett, Johnny Sexton and Owen Farrell, compare.
The week that was on social media … Farah Palmer Cup
We check out what our Farah Palmer Cup players have been up to on social media this week.
All Blacks Sevens kick off pre-season in Germany
The Oktoberfest Sevens awaits the All Blacks Sevens who departed for Germany to play their sole pre-season tournament ahead of the next World Series.
Former players developing next generation
The Jock Hobbs Memorial National Under 19 tournament featured plenty of names to remember, but in 2019 there were also plenty of household names on the sidelines.
Business as usual for All Blacks' build-up for Boks
All the attention of the rugby world might be on the first big game of the tournament between the All Blacks and South Africa on Saturday in Yokohama but so far as the New Zealanders were concerned it was business as usual ahead of a Springbok Test.
Foster happy with All Blacks' midfield resources
Perceptions the All Blacks didn't have an established midfield combination in the manner of Ma'a Nonu and Conrad Smith at the 2015 World Cup were understandable but assistant coach Ian Foster is happy with his resources for the World Cup in Japan.