Reaction to the All Blacks' 26-47 loss to Australia in their Investec Rugby Championship/Bledisloe Cup Test has highlighted a drop in their favouritism for the Rugby World Cup starting in Japan next month.

Some of the reaction has been:

Beaten all black and blue, this was not just a defeat for New Zealand, it was a psychological stuffing of savage proportions…

"In an attempt to restrict any mental damage in New Zealand there will be reminders that Australia beat the All Blacks four years ago, again on the eve of the World Cup. Yet it was Richie McCaw's men who went on to win the World Cup, defeating the Wallabies 34-17 in the final. Ah, but this was different; so seismically different that I am prepared to write off the chances of the three-time world champions, still the bookmakers' favourites to make four….

"Even before the defeat in Western Australia I had a list of reasons why this will not be New Zealand's year. The 2011 and 2015 sides were settled. This side is not. In midfield Ma'a Nonu and Conrad Smith kept a grip on the game in a way various Kiwi combinations have failed to do this season or against South Africa last season.

"In the back row there was Jerome Kaino, [Richie] McCaw and Kieran Read, the best, 6, 7 and 8 in the world. Kaino and McCaw are absent. Captain Read has lost that thrilling wide-channel try-scoring and creating game that was his trademark. McCaw was coming to the end in 2015, Read might just have started his descent too early…

"Australia thoroughly deserved their victory and the All Blacks looked a pale version of their usual dominant selves having already huffed and puffed against Argentina and South Africa.

"This win and performance also takes the heat off head coach [Michael] Cheika while his All Blacks counterpart Steve Hansen is left with major selection problems just a month before hoping to guide his country to a third Webb Ellis Cup success in a row.

"His 99th Test saw the Bledisloe Cup slip back into Aussie hands [sic] for the first time in 16 years."

"…Have Australia ever played a better half of rugby against the All Blacks than they did in the second half. They were smashing it up on either side of the ruck, going forward up the middle channel, instead of mindlessly going wide, wide, wide.

"No one is deluding themselves that it gets any easier from here. The All Blacks will be ferocious in their intensity next Saturday at Eden Park. If they lost there, as they did in Perth, their 17-year Bledisloe Cup domination is over.

"For the moment, however, rugby can rejoice in once again being restored as a topic for polite conversation. It had become one of the unmentionables, alongside religion and politics. In fact it had become a shorthand, if vexed, way of establishing how people felt on both those subjects."

"Thumping the All Blacks on home soil may have been an incredibly satisfying achievement but the Wallabies are bracing for a completely 'different beast' when they try to do what no Australian team has done at Test level for 33 years: win at Eden Park.

"Now the dust has settled on a 47-26 victory over the All Blacks in Perth and the shock of Saturday's emphatic victory has sunk in, attention has quickly turned to ensuring the group does everything they can to get their hands on the Bledisloe Cup for the first time in 17 years.

"There was a fine balance between savouring one of the greatest Wallabies wins in recent years – just their third against New Zealand from the last 22 attempts – and not getting carried away before a return clash in Auckland which will focus the attention of the rugby world." 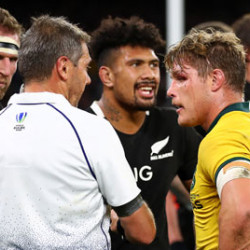 View all
PREVIEW: All Blacks v Argentina (Newcastle)
A season like no other reaches its finale for the All Blacks in their final Investec Tri Nations Test, against Argentina in Newcastle on Saturday.
PREMIERSHIP FINAL PREVIEW: Auckland v Tasman
Auckland Rugby has thrown the gates open for free entry at Eden Park for what shapes as a blockbuster Premiership final between the number one placed team after the regular season, Auckland, and last year’s champions, Tasman Mako.
PREVIEW: Mitre 10 Cup Championship final – Hawke’s Bay v Northland
History is on Hawke’s Bay’s side heading into Friday night’s Championship final at McLean Park. The Magpies have won five of their last six Mitre 10 Cup matches against Northland, including their last three in succession. But Northland have all the motivation they need, in their first final in 23 years, don’t expect them to back down from the challenge in Napier.
All Blacks team named for second Investec Tri Nations Test against Argentina
The All Blacks team has been named to play Argentina in the Investec Tri Nations Test at McDonald Jones Stadium, Newcastle, on Saturday 28 November (Kick off: 7.45PM AEDT, 9.45PM NZT LIVE and EXCLUSIVE in New Zealand on Sky).
Discipline can’t slip against Argentina in Newcastle
Learning the lesson that intimidation is a common ploy against All Blacks is one thing, dealing with that intimidation is another.

Northland Black Ferns bond over RWC 2021 being hosted at home
The idea of playing Rugby World Cup matches in Whangarei next year is extra special for two Black Ferns who whakapapa back to Northland. One grew up in the area, and returns at every possible opportunity, the other has made her home there three years ago and feels she has found her place.
Māori All Blacks squad announced to play Moana Pasifika in Hamilton
Māori All Blacks Head Coach Clayton McMillan (Ngāi Te Rangi/Ngāi Tamawhariua/Te Rangaihouhiri) today named eight new caps in a 24-strong squad to prepare for a one-off match against Moana Pasifika presented by Sky at FMG Stadium Waikato in Hamilton.
All Blacks have to trust their ability - Whitelock
Having been on the end of the last consecutive All Blacks Test losses, lock Sam Whitelock had been able to echo sentiments from that experience ahead of Saturday's final Tri Nations Test for the side, against Argentina, in Newcastle.
Teammates turn rivals for Red Bull Ignite7
Some of the best sevens players in country will lead the eight Red Bull Ignite7 teams next month with the captains, and coaches, named today.
Historic first squad for Moana Pasifika unveiled
The colours of Pacific nations Fiji, Samoa and Tonga will come together under the first ever Moana Pasifika squad named by Head Coach Fa’alogo Tana Umaga to play an historic match against the Māori All Blacks next month.
Downer Referees: Mitre 10 Cup FINALS
We’ve finally made it to the Mitre 10 Cup finals and what a couple of games we have locked in.
Investec Tri Nations title anyone's for the taking
Coming back from consecutive losses to beat Argentina in Newcastle on Saturday would keep the All Blacks in the Investec Tri Nations hunt.
Finalists confirmed in the Mitre 10 Cup
Auckland and Hawke's Bay have secured home finals in the Mitre 10 Cup Premiership and Championship next weekend.
New Zealand Barbarians push Black Ferns to the limit in Nelson
The Black Ferns will take the W against a very competitive NZ Barbarians in Nelson, but there is much work to do ahead of the Rugby World Cup in 10 months’ time.
Black Ferns pool opponents confirmed for the Rugby World Cup
Local rivalries will be the highlight of pool play at next year's Rugby World Cup in New Zealand as a result of the draw made in Auckland on Friday.
Official Match Programme: Black Ferns v NZ Barbarians
Welcome to the official match programme for the Black Ferns final match of 2020 against the New Zealand Barbarians in Nelson on Saturday 21 November.
Mitre 10 Cup Semi-finals: Team Lists
We are down to the business end of the Mitre 10 Cup with spots in the Premiership and Championship finals up for grabs.
RWC2021 OFFICIAL LIVE DRAW STREAM
Tune in on Friday morning from 7.15am (NZT) for the social show and build up and then at 7.30am catch the official live draw for Rugby World Cup 2021, which will be hosted in New Zealand. Find out who the Black Ferns will have in their pool for next year's home tournament.
Gibbs changes up NZ Barbarians side to face Black Ferns in Nelson
New Zealand Barbarians Head Coach Rodney Gibbs has made four changes to his starting fifteen for their second match presented by Downer against the Black Ferns on Saturday at Trafalgar Park in Nelson.
Two Black Ferns debutants named to play second NZ Barbarians match
Black Ferns Head Coach Glenn Moore has introduced two new players to his starting lineup for Saturday’s return match against the New Zealand Barbarians presented by Downer at Trafalgar Park in Nelson.