The Six Nations is suddenly wide open after England overturned the form book and the predictions of must pundits in round one.

The only certainty now is that France, Ireland and Italy will not be winning a Grand Slam in 2019.

QUICK TAP: SIX NATIONS SHOWS RWC IS WIDE OPEN - KAYES
Led by a bruising display by loosehead prop and man of the match Mako Vunipola, the England pack put the squeeze on Ireland at both set-piece and in the collisions to win 32-20 in Dublin, and with a bonus point, no less. Former All Blacks coach and current England defence coach John Mitchell will be especially pleased with the dominant tackle stats, which England won at a canter. But it was tactically sound in general from England, so Eddie Jones has got one-up on Joe Schmidt.

Left wing Jonny May crossed after just 90 seconds as England brought the early intensity. While there were moments of alarm for Jones, as when Tom Curry was binned for a late tackle and Maro Itoje took out Keith Earls recklessly, Ireland just did not have its usual accuracy. Exhibit A was when wing Jacob Stockdale made a bad mistake in the tackle of Jack Nowell, gifting fullback Elliot Daly the try.

World Rugby player of the year Johnny Sexton looked rushed at times in the face of England’s rush, aggressive defence. It did not help that his halfback partner Conor Murray looked decidedly rusty after a long layoff from international rugby.

Two late scores from centre Henry Slade, the first from a May chip and chase and the second from an intercept, sealed England’s impressive victory.

The final try, to Ireland replacement John Cooney, was pure consolation. England was not fancy, but deadly effective, while Ireland was just loose and off the pace.

Ireland will now have to face Scotland at Murrayfield this weekend, and the Scots will take confidence from the fact they dispatched Italy 33-20 to go top of the table on points differential.

Wing Blair Kinghorn led the way for Scotland with a hat-trick, aided and abetted by the penetrative Stuart Hogg from the back and Finn Russell running the cutter with aplomb. But in truth the final margin was flattering to the Azzurri, who scored three late consolation tries when Christchurch-born prop Simon Berghan was in the bin for a collapsing a maul.

Italy was, as ever, earnest in its endeavours, but must look closely at its defensive structures. Conor O’Shea’s men will now host Wales, fresh off a remarkable 24-19 win over France in Paris in the Friday night opener.
While the wash-up of that clash shows Wales has now won 10 on the bounce and France has lost seven of its last eight, you would not have known that from the first half when the home side played with discipline and aggression from its hefty pack to lead 16-0 as the rain fell.

Alas, France crumbled while Wales looked a completely different side in the second stanza.

Wing George North was the chief beneficiary, latching onto a Gareth Anscombe chip – his solid general play was countered by some early wobbles off the tee – and then sealing the win by bolting 60m for an intercept try, courtesy of a brainless long, looping pass by lock Sebastian Vahaamahina.

France must dust itself off smartly to face England at Twickenham, but this result will be a hammer-blow to its mindset. 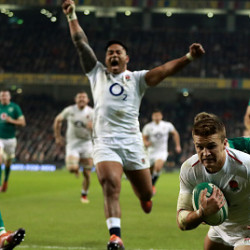