Any thoughts that the rugby rivalry between New Zealand and South Africa had been deflated were forcibly discounted when the Springboks managed a famous 36-34 Investec Rugby Championship win at Westpac Stadium in Wellington.

It was the first time since 2009 that South Africa had won in New Zealand and ended a run of six consecutive wins in the contest and has left the Championship facing a final decision in Pretoria in three weeks time.

After the 0-57 humiliation suffered in Albany last year it was the perfect riposte under new coach Rassie Erasmus and will rank as one of the outstanding South African victories in New Zealand in the history of the long-running rivalry.

New Zealand were unable to deny South Africa in the final quarter and while getting back within two points, they suffered some indiscipline in decision-making and paid the price.

All Blacks captain Kieran Read had a huge game throwing himself into the fray in an attempt to lift his side but in the end the South African determination brought its reward, even if they didn't start the game that well.

South Africa came into the game looking to avoid mistakes, but first five-eighths Handre Pollard suffered the indignity of making the kick-off go long allowing the All Blacks to move the ball through their hands, and from a lineout in the fourth minute open their scoring.

That came after centre Anton Lienert-Brown and wing Rieko Ioane made ground in the midfield before a ruck saw first five-eighths Beauden Barrett, who had an off night with his goal-kicking, twice finding the posts without effect, pick the ball off his toes and up to brother and fullback Jordie Barrett who was ushered into space for a clear run at the line.

Wing Ben Smith featured with two early runs along the right touch, the first almost producing a try for Lienert-Brown, and then on the second occasion it was on the back of a long blindside pass by halfback Aaron Smith to hooker Codie Taylor. He lobbed a blind pass which Smith, coming from behind, took at pace to race down the line and in-pass to his halfback who was perfectly positioned in support to score.

But some better play from South Africa saw them make the most of their first foray into All Blacks territory. Skipper Kolisi carried the ball up in midfield and when fullback Willie le Roux joined the line they had the numbers to outflank the All Blacks' defence for wing Aphiwe Dyantyi to run in the try.

Untidy All Blacks play from the restart when the ball didn't go 10 metres only to be contested and lost by South Africa, was an example of the diffidence they showed on the night. Then, on the other side of the field, a turnover was won and le Roux slipped a kick through which bounced well for Aphiwe. Chased by Beauden Barrett he got a kick away which went to touch where Jordie Barrett made a quick throw which sat up when it bounced in front of Ioane allowing le Roux to pounce and score with Pollard's conversion giving the Springboks a 14-12 lead.

They extended that in the 31st minute when from a lineout drive, the set the maul and with hooker Malcolm Marx in control on the back, the All Blacks couldn't hold them and he scored.


Having landed a penalty goal to end the first half, the Springboks made the first impression in the second half, again off another All Blacks mistake when Lienert-Brown's attempted pass was intercepted by replacement wing Cheslin Kolbe who carried South Africa to a 31-17 lead.

Winning consecutive penalties out from the Springbok line, at the second attempt they attempted a blindside move which looked to have come undone before the ball was cleared to Barrett whose pass bounced to Ioane who punished the soft defence to score in the corner.

The Springboks replied immediately however, and when le Roux played a missed touch kick from replacement halfback TJ Perenara, the ball was moved with effect and when replacement Elton Jantjies flung a long pass to No.8 Warren Whiteley whose pass allowed Dyantyi to cut back inside and score his second, 56 minutes into the game.

Four minutes later the All Blacks demonstrated their own lineout drive with hooker Codie Taylor getting over for the try.

With six minutes left the All Blacks again punished South Africa's penchant for conceding penalties, with referee Nigel Owens having issued a general warning, and another lineout drive from well out saw replacement flanker Ardie Savea get over for the try but Barrett's conversion missed.

New Zealand attempted to get another try but South Africa had the smell of victory in their nostrils and their furious defence carried them home.

WHAT A GAME! A nail-biting finish as it comes down to the final play but a knock on denies the fairy tale finish.#NZLvRSA pic.twitter.com/3nJsyBzEC9— All Blacks (@AllBlacks) September 15, 2018 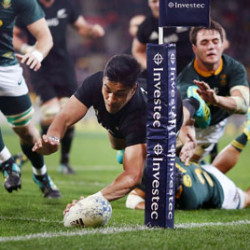