Squire to depart New Zealand at end of 2019 All Blacks and Highlanders loose forward Liam Squire has announced he will leave New Zealand at the end of the 2019 season, to take up a two-year contract in Japan.

Originally from Manawatu, Squire made his provincial debut for Tasman in 2011. He played for the Chiefs in 2014-2015 before heading south in 2016 to join the Highlanders with a reputation as a bruising defender and hard running attacker. He represented the Maori All Blacks in 2013 and his All Black debut in June 2016 coming off the bench against Wales.

QUICK TAP: FIVE TALKING POINTS FROM ROUND ONE OF SUPER RUGBY
He has played 23 matches (scoring four tries) for the All Blacks and 44 Investec Super Rugby games, including 30 (nine tries) for the Highlanders. At 1.96m and 115kg and with a distinctive mullet hairstyle Squire normally made a big impression in any game he was involved with.

Squire said: “ It seems like the right time to go. I have really loved my time in New Zealand with the Tasman Mako and in particular down here with the Highlanders. It’s a club that gave me a chance and I appreciate the support I have had in the South. I am certainly keen to have a really good last season with the guys.”

?? LAST CHANCE TO VOTE! Vote for Kelly Brazier's gold medal-winning try as your Halberg Awards Sporting Moment of the Year at https://t.co/ScRAAFllRi or text SM3 to 556!

Votes open to Thursday and you can vote everyday...

All Blacks Head Coach Steve Hansen said: "Liam has grown into an outstanding rugby player since coming into the All Blacks in 2016 and we again look forward to seeing how he goes this year. His physicality, pace and skills are a real point of difference and he's a really well-rounded player. We wish him all the best for his Japanese adventure next year."

Pulse Energy Highlanders Head Coach Aaron Mauger is an admirer of his style of play.

“Liam gives 100 percent every time he takes the field, he inspires his team with his fearless approach and has a unique ability to swing momentum in games with his physicality. We look forward to helping Liam achieve the high standards he is capable of in his last season with us and we wish him well for the future.” 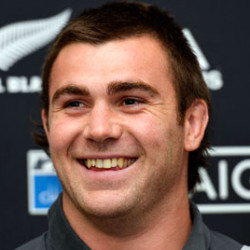